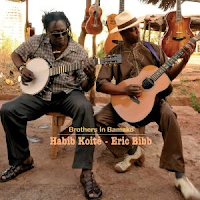 With more than twenty recordings to his credit, most of them released in the last fifteen years, Eric Bibb has established himself as one of the leading practitioners in the folk blues genre. His music has always blended a variety of elements into music that honors our humanity and rejoices in the human spirit. An accomplished songwriter with an easy-on-the-ears vocal style, Bibb's music rarely ventures into the dark corners of life, opting instead for a gentle approach that focuses on the best aspects of our existence. His stature in the Blues community is reflected in his numerous nominations for Blues Music Awards, including two this year for Acoustic Artist and Acoustic Artist of the Year for his Deeper Well project, which had Bibb working with some of the best Cajun and Creole musicians in Louisiana.

Now he has partnered with Habib Koite, a leading light for modern African music. Their friendship started a decade ago, leading to this collaboration that reaches deep into Koite's Mali homeland. Both men play a variety of guitars, banjos and ukeleles with Mamadou Kone handling the various percussion instruments. The setlist includes five songs that Koite wrote plus four others he co-authored with Bibb, who contributed two originals of his own.

The disc opens with “On My Way to Bamako” as Bibb relates his excitement at making his first visit to West Africa over a lilting rhythm. The following cut finds Koite sharing his thoughts regarding his first visit to Los Angeles for a serries of live performances. Singing in an African dialect, Koite switches to English on the chorus to express his delight for the way tequila made him feel. The two singers trade the vocal on “Needed Time”, a traditional tune that Bibb has recorded several other times.

Bibb's “Tombouctou” is his tribute to a famous town in Mali, better known in the West as Timbuktu. The instrumentalists develop a deeper, harder rhythm with Kone's light touch providing a pleasing contrast. “Nani Le” and “Mami Wata” are two instrumentals with the former featuring some delicate picking while the later track honors the worship of the African water goddess. Koite's banjo is prominently featured in the arrangement for “Khafole”.

The blues element is the strongest on “We Don't Care”, with Bibb taking listeners to task for the shallowness that often drives our daily lives. Another original, “With My Maker I Am One”, Bibb sings convincingly about how we are all connected as the music echos Memphis Slim's classic “Mother Earth”. Koite provides a striking example of blues done in an African style on “Foro Bana”, his rich voice ringing out over more excellent guitar picking. Bibb lightens the mood with a pervasive prayer of hope on “Send Us Brighter Days”.

The disc closes with two covers, the first a melancholic take of  Bob Dylan's “Blowin' in the Wind” with Olli Haavisto's pedal steel guitar injecting a strong country feel into the track. Next is “Goin' Down the Road Feeling Bad”, with a wistful vocal from Bibb over an insistent banjo line and excellent acoustic guitar work. They make a fitting close for a project that successfully completes the circle of bringing traditional blues, folk and spiritual elements back to their African origin, where Habib Koite burnishes the sounds with a presentation that looks to the here and now rather than the past. The end result is not strictly blues – but there is plenty to enjoy for listeners with eclectic tastes.