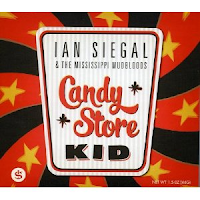 I am going to stray from the usual review format and admit that I really struggled with Ian Siegal's latest release. While I refrain from reading reviews on discs that I know I will be writing about, I still managed to hear/read lots of positive comments about the British guitarist's second venture deep into the Mississippi hill country. And when your backing band includes brothers Cody & Luther Dickinson of the North Mississippi Allstars plus Alvin Youngblood Hart, you are pretty guaranteed that the music will be authentic, deeply grounded in the roots.

The buzz on this one was seemingly confirmed when it received a nomination for a Blues Music Award in the Contemporary Blues Album category. It has also appeared on several Best of the Year lists from several on-line blues websites. So why is it that I can't get all warm and fuzzy over a disc that has received plenty of critical respect?

There are a number of strong performances. “Earlie Grace Jnr” finds Siegal painting a descriptive portrait of a man staying to stay ahead of bad luck. His slide guitar dances around in the background, riding a shifting rhythm from Cody Dickinson. Siegal co-wrote “Kingfish” with Luther Dickinson and they trade guitar licks throughout the insistent hill stomp. “So Much Trouble” is another powerful tune penned by Lightnin' Malcolm that settles into a sweltering groove punctuated by the droning tones of Luther's sitar. Siegal's earnest vocal on “Bayou Country” is so convincing that you quickly forget that he grew up in the UK, not the swamplands of Louisiana. The track is one of several that feature the spellbinding backing vocals of Stefanie Boltan, Sharisse Norman and Shontelle Norman.

Other cuts illustrate where the disc comes up short for me. With only a couple of tunes in hand when he arrived at the studio, Siegal had to compose on the fly – and it shows. “Loose Cannon finds Siegal tossing off a string of phrases that never come together, making this one one long boast. It is followed by the rapid shuffle rhythm of “I Am the Train”. This time Siegal spouts off a stream-of-conciousness lyrical stream that leaves him sounding like a poor man's Bob Dylan and detracts from the fine musical accompaniment. Garry Burnside sits in on guitar on “Strong Woman”, another track whose primal energy fizzles due to simplistic lyrics. On “The Fear”, Siegal indulges in his rock roots, delivering a stark vocal over ringing guitar chords.

He recovers to deliver a memorable performance of the intimate love ballad, “Rodeo”. Hart doubles on guitar and bass while Cody's poignant keyboard work fleshes out the arrangement. The closing cut, “Hard Pressed (what da fuzz?)” sports distorted guitar tones and a swirling soundscape as Siegal rattles off another  series of boastful statements that ring true due to his ardent delivery.

While there is much to enjoy on this project, it could have been even better. Siegal isn't the only artist who has waited until their back was against the proverbial wall before they get fully engaged in the creative process. You have some fine music being played by a collection of outstanding n musicians. I find it unfortunate that Siegal didn't take the time to make sure that the lyrical content on all of his songs was up to the standards of the rest of the project.