My Guitar's My Only Friend reviewed by Dennis Barker 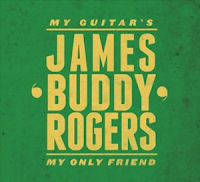 Canadian native James "Buddy" Rogers started playing guitar at the early age of 10, formed his first band at 11, and by the time he was 13 was a regular at the local blues clubs. At 19 he teamed with former B.B. King bassist, Russell Jackson, and went on the road for the next 5 years. While performing at numerous clubs, concerts and festivals, Rogers shared the bill with the likes of Canned Heat, Sam Taylor, The Holmes Brothers, Elvin Bishop, Kenny Neal and many others. Now, with 25 years of gigging behind him, this veteran blues man has teamed with producer Tom Lavin, of "Powder Blues" fame, to record "My Guitar's My Only Friend", a collection of 10 original blues tunes written by James and Lavin.

Buddy opens the CD with the title track, a traditional blues tune, as are most on this disc, featuring smooth vocal complimented by some very nice guitar. Next comes "Let's Get Loose," an upbeat party song, with some good blues riffs. "I'm On The Road Again" has Buddy doing some fine lead guitar, reminiscent of ZZ Top, followed by "Disappearing Baby Blues", a bluesy swing tune with Freddy King influenced guitar.

Track 7, "Guitar Sue", is a nicely done, easy going, uplifting, happy tune with Chuck Berry inspired riffs. "Dawg", perhaps the best cut on this CD, is a funky, blues tune about, what else, man's best friend and the blues. With the funky rhythm and Rogers's excellent guitar, this is sure to be a favorite with most folks.

The closer, "Buddy's Walk", the only instrumental on the disc, is one you will listen to over and over, a great tune to end a very solid effort by both James and producer, song writer, musician, Tom Lavin. James "Buddy" Rogers has paid his dues, and it shows.