Blues Beyond the Borders; Live In Istanbul reviewed by Rick Davis 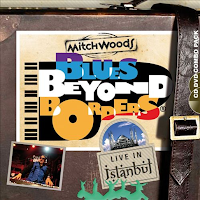 Mitch Woods and Rocket 88s have delivered music that transcends cultural boundaries as they embarked on their recent five week trip to the Republic of Turkey. Blues Beyond Borders–Live In Istanbul, resulted from a live recording at the Efes Blues Festival, October, 2010. The Vizztone label made the CD/DVD combo possible for release, selecting this memorable show, which was one of twenty-six shows in twenty cities over this five-week period. Mitch Woods, the New Orleans style boogie woogie piano man from California, with his booming vocals and all-star band, keep the crowd entertained with a retrospective collection of Mitch Woods classics and cover songs from a vault of treasures.

The Rocket 88′s absolutely radiate with Amadee Castenell on sax and background vocals, Cornell Williams on bass and vocals, Adam Gabriel on guitar and background vocals, and Larry Vann on drums. The CD/DVD combo share Mitch Woods tunes "Solid Gold Cadillac," "Mojo Mambo," "Boogie Woogie Bar-B-Q" "Queen Bee," and "Long Lean & Lanky." Other common cover songs include "I Got A New Car" written by Erin "Big Boy" Groves, Jr., "What Can I Do" by Roy Milton, Rene Leon's "Crawfishin'," the Henry Glover and Fred Weismental tune "Down Boy Down," the Eddie Boyd and Willie Dixon classic "Third Degree," Jackie Brenston's "Rocket 88," Roy Byrd's "In The Night/Lambaya Puf De" (an American and Turkish tune combined), and the closing track, the old time boogie woogie classic "House Of Blue Lights" written by Don Raye and Freddie Slack. The DVD includes videos of their journey, exploring the Republic of Turkey, the culture, adventures on the road with the Kenny Neal band, Turkish Independence Day at Izmir, introduction of the Pozitif Crew, and a slide show of the scenes from Turkey.

Mitch Woods remarks about the reception they received throughout the country. The Istanbul concert was filled with predominantly young college age fans. With Wood's charisma, he brought the house down during the concert. Founded in 1989, Pozitif, based in Istanbul, Turkey, is an independent leader in music dedicated to bringing a wide range of music to audiences with the following mission statement: "changing the way people perceive life through music." Judging from the response of the audience, this mission statement was met. Mitch Woods and his Rocket 88s are truly ambassadors of the blues. This tour really brought the two countries together using the common tread of music, proving the real emotional power of the blues.

Posted by Crossroads Blues Society at 3:52 AM