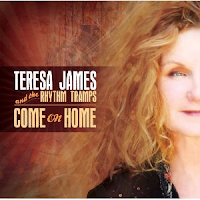 Working with blues artists like Levon Helm, Delbert McClinton, Bonnie Raitt, Kirk Whalum, Marcia Ball, Tommy Castro, Al Anderson, Asleep at the Wheel, and Lee Roy Parnell, Teresa James has established herself as a well recognized contemporary blues singer. Her voice is featured on albums released by artists like Kirk Whalum, Randy Newman, Tommy Castro, Lee Roy Parnell, Walter Trout, Stephen Bruton, and Glen Clark. She started as a Texas blues singer and moved to Los Angeles where she is now based, working with her band The Rhythm Tramps.

Her latest release on Jesi-Lu Records is titled Come On Home and comes highly endorsed by Bonnie Raitt. "I've been a fan of Teresa's voice and writing for a long time. Her legions of fans, including me, are so glad to finally have both on this CD." Ten of the twelve tracks are originals either written or co-written by the bass player Terry Wilson with Teresa co-writing two of the tracks. Mike Finnigan shares vocals with Teresa on the soulful Etta James & Harvey Fuqua tune "If I Can't Have You." Her Texas roots can be heard in the up-tempo, boogie-woogie T. Klemperer song "Long Way From Texas." Her vocals evoke those of Alannah Myles on the funky opening tune "Come On Home To Me," offering only retribution for a lousy relationship. Her style of delivery follows closely to Bonnie Raitt's on the original "My Baby Knows What I What." Teresa will reach out and capture your emotions with the slow, soulful tune "Forgetting You." The horn section consisting of  Jerry Petersen on saxophones and Lee Thornberg on trombone and trumpet, deliver a stunning performance on this slow ballad as well as the funky, soulful "Still Got The Message." Teresa James and The Rhythm Tramps bring that Motown sound center stage with powerful vocals and a strong instrumental performance on "She's Got A Way With Men." "That's Just Love" has a sweet soul charm singling out both her fine vocals and the exceptional musicality of the band. Add an element of Zydeco, the presence of the Congo Square, and the magic of voodoo for the haunting sound of "Voodoo Doll." The lyrics seem to penetrate your soul on the acoustic song "Carry That Burden." The fiery slide guitar riffs of Billy Watts added to the powerful vocals of Teresa James on the horn-driven number "I Can Do Better," will knock you off your feet. The CD ends all too soon with another high-powered foot stomper "All I Wanna Do Is Dance."
The songwriting and instrumental presence of this album lend themselves so well to an extraordinary stage performance. After listening to Come On Home, you will be ready to see Teresa James and The Rhythm Tramps live.