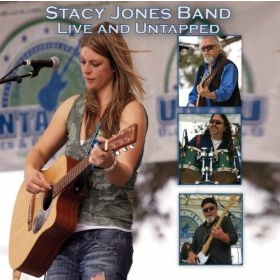 Stacy Jones got her start in music playing piano at the age of four. From there, she began playing the guitar at seven and at eight she began performing with her father, Tom Jones in Seattle, Washington. At fourteen she worked with a local group and by sixteen she was learning harmonica. She became a regular performer at The Scarlet Tree blues jams where she worked with other notable blues artists including Mark Dufresnes from Roomful of Blues. She later worked with The Seattle Blues Band and Highway 99 Blues AllStars. Her first band, Stacy Jones And The Wolf Tones was formed in 2007 releasing their debut CD Red Dirt Road. The band evolved into the Stacy Jones Band and has since released Live at the Triple Door EP in 2009," Long Time Comin' in 2010 and the 2012 studio album No Need to Spell it Out.

Also released in August of 2012 is their latest CD Live And Untapped, featuring the current line-up of Stacy Jones on vocals, keyboards, acoustic guitar, and harmonica, Jeff Menteer on guitar and vocals, Tom Jones on bass, and Rick Bowen on drums. The live CD is superb collection of five cover songs and six original tunes. They begin with a lively 7:46 rendition of T-Bone Walker's "T-Bone Shuffle" with Stacy and Jeff Menteer trading riffs on harmonica and guitar after Stacy takes charge on her opening harp solo. "Heavy Water", one of their studio tunes written by Rick Bowen, would be a great flip side to The Commitments "Take Me To The River." It really shows just how powerful Stacy's vocals carry through the audience. "Back Again," is a hard-drivin' song by Jeff Menteer, with Stacy and Jeff combining efforts on strong vocals. B.B. King's "You Upset Me" takes a different direction with Jeff's fiery guitar licks and Stacy delivering stellar keyboard solos. Tom Jones takes center stage on bass with the band's interpretation of The Rolling Stones classic "Miss You." You owe it to yourself to hear the versatility of Stacy's voice both on this song and the next cover song, the Ellington Jordon & Billy Foster classic "I'd Rather Go Blind." Jeff Menteer displays his guitar prowess on two of his tunes "You Belong To Me" and "Waitin' On Love." The set also includes another tune penned by Menteer, "I Feel Like Leavin,'" reminiscent of a Texas blues number echoing from the confines of Antone's. The last original tune, "Glory Bound," is this time written and sung by Stacy Jones applying her powerful, impassioned vocals. She also delivers those explosive vocals along with acoustic guitar on the Jackson, Miner, Smith hit (Your Love Keeps Lifting Me) Higher & Higher, done originally by the late great Jackie Wilson.

This live performance reflects a force to be recognized in the blues world. Hopefully they will be performing soon in a location close enough for everyone to enjoy. Don't let The Stacy Jones Band and Live and Untapped get away!