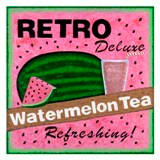 Watermelon Tea
Retro Deluxe
Rinkled Rooster
www.retrodeluxe
band.com
16 tracks/63:11
Here's a band that aspires to be nothing more than a hard rocking unit capable of playing a wide variety of American roots music. And, man, are they good at it !!! If you are tired of retreads of the same old 12 bar blues patterns or guitarists who worship at the school of faster/louder meandering solos, you definitely want to check out this release.
The leader is Bobby Joe Owens, lead singer and composer of all sixteen songs under his alias Robert J. Thompson. Zach Sweeney is the guitarist with impeccable taste while Justin Showah plays standup and electric bass. Noted producer Jimbo Mathus is on board as the drummer, appearing on two tracks in his usual role on rhythm guitar. Billy Earheart adds keyboards to half of the cuts.
The title song is a rockabilly-tinged blues with Owens belting out his praise for his favorite beverage. “Too Much Drama” is another rocker featuring some wild guitar from Sweeney. Owens' growling vocal is a perfect fit for “Rockin' the Blues Tonight” with the band pulling out all of the stops behind Earheart's plunking piano playing. It's so much fun, they do it it again on the next song, stompin' their way through the humorous “What in the Devil Did I Do Last Night”. They can also be just effective on the slower, grinding tempos like the one on “A Woman Like That”, which sounds like something that a young Elvis would have done.
When they switch to blues, Retro Deluxe can dig deep on cuts like “I've Got One Woman” with Owens making it clear that temptation will not get the best of him over a swampy groove or lay down a unforgiving boogie riff on “You're Lyin'”. Sweeney plucks at your heartstrings on the slow blues “The Mother Nature Song” as Owens confides about all of the damage “..the bitch” has caused. “One Tooth Tessie” is a rousing acoustic romp with Mathus on harp and Owens contributing another fine vocal.
Switching to organ, Earheart fleshes out the arrangement on the haunting take of “Wine & Religion”.  “Beer and Whiskey, Wine and Cigarettes” employs a lighter, swinging beat on a cautionary tale about too much indulgence. Owens' distorted vocal on “Rough, Tumble, Roll” fits the frantic boogie beat with Sweeney tearing up and down his guitar fretboard.
The only cut that misses the mark is “Clarksdale, Mississippi”, done in by the constant use of the title throughout the song, wasting a strong musical performance. The disc closes with “Blues Infusion” as they give full flight to their rock influences, echoing the “Purple Haze” riff with Sweeney breaking out his wah-wah pedal for a last minute guitar crescendo with some nice percussive work from Mathus.
There is nothing here that hasn't been done before. But right from the start, you can tell that these guys get it – that the best music has a strong beat, lots of energy and plenty of feel. They do not disappoint on any count - and will have your body movin' and groovin' throughout this highly recommended disc !!
Reviewed by Mark Thompson
Posted by Crossroads Blues Society at 12:46 PM