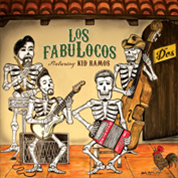 Dos
Los Fabulocos featuring Kid Ramos
Delta Groove Music, Inc.
www.myspace.com/losfabulocos
www.deltagroove
music.com
12 tracks/45:12
Los Fabulocos were formed in 2004 by Jesse Cuevas and Mike Molina, former members of the east LA band, The Blazers, that achieved some measure of success before the turn of the century. The additions of James Barrios on bass guitar and the outstanding blues guitarist Kid Ramos completed the line-up. Cuevas is the lead singer and also tears it up on the accordion. Molina on drums joins Barrios to form a rock-solid rhythm section.
The band's music is a rich blend of many styles. Some refer to it as “Cali-Mex”, but it would be difficult to squeeze all of the group's influences into an all-encompassing label. Whether playing a conjunto ballad or straight-ahead rocker, the band's energetic performances and stellar musicianship make labels a moot point.
Listen to the surging drive of “She Wakes Up Crying” with Cuevas' smooth vocal setting the stage for a raging solo from Ramos. Cuevas refuses to take a backseat and after another verse, he matches Ramos with some hot licks on the accordion. Ramos delivers more taut guitar work on Little Richard's “Keep a Knockin' “with Cuevas alternating verses in Spanish and English. “I Never Thought” has a swaying rhythm that is guaranteed to get couples out on the dance floor. Big Manny Gonzales, another member of the Blazers, helps out on backing vocals and Rob Dziubla adds his tenor sax to the mix.
It's hard to resist comparing Los Fabulocos to another east LA band, especially when you hear tracks like “Everything Will Turn Out Alright”, which sounds like a gem from early days of Los Lobos. Cuevas lays down a heartfelt vocal on a tune in a roots-rock vein with a dose of country music. “Los Chuchos Suaves” finds the group in overdrive on a traditional Mexican tune from Lalo Guerrero, with Ramos taking solo honors for more wicked guitar playing. Cuevas take center stage on “Una Pura Y Dos Con Sal”, squeezing delightful runs out of his accordion while the rest of the band creates another pulsating rhythm in support.
Ramos handles the lead vocal on his original “My Brother's Keeper”, his distorted guitar tone creating the perfect backdrop for the biblical-based lyrics. The band also does a tune written by Barrios. “The Coffee Song” captures a man reminiscing about a lost love and features another strong vocal from Cuevas. Cuevas penned “The Vibe”, with Molina's pounding beat and Ramos exquisite rhythm guitar work making this one another highlight.
Call it what you want – rock, R&B, rockabilly, norteno, Tex-Mex – the simple truth is that Los Fabulocos make damn fine music. Jesus Cuevas has really come into his own as the front man and his superb accordion playing energizes the entire disc. And for those who thought Kid Ramos should have been given more chances to stretch out on the band's first recording, be advised that his brilliant work is all over this one. If you just want a standard blues record, you'll have to look elsewhere. But if you crave a varied program played with energy and gusto, this one offers plenty of first-rate performances for your listening pleasure.
Reviewed by Mark Thompson
Posted by Crossroads Blues Society at 1:01 PM