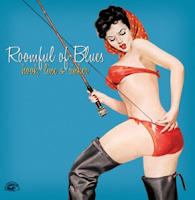 Hook, Line & Sinker
Roomful of Blues
Alligator Records
www.roomfulof-blues.com
12 tracks
This year, Alligator Records celebrates their 40th Anniversary.  Quite the feat, but I was looking and this band has been around for even longer- forty three years now.  There have been many a musician who have graced the stage and recording studio as part of this band.  Frankly, I love their live performances but I must admit their last few CDs left me feeling kind of ‘meh’.  Well, that has all changed.  This is one hot album!
Chris Vachon on guitar leads this current band of eight talented members.  Phil Pemberton has taken the helm with lead vocals for the band as of last year.  Veteran New England jazzman John Turner is on bass, Travis Colby graces the keys, Ephraim Lowell is on drums, Rich Lataille and Mark Earley are the sax players and Doug Wovlerton is the young but talented trumpet player.
I rarely quote liner notes and promo materials, but this short note really sums things up: : “Hook, Line & Sinker features twelve carefully chosen songs from Little Richard, Dave Bartholomew, Amos Milburn, Clarence “Gatemouth” Brown, Floyd Dixon and others. Produced by Vachon, the CD is a ferocious and enthusiastic blast of rocking guitars, punching horns and huge, room-filling vocals. The results are a non-stop hip-shaking party. It’s clear why People magazine said Roomful’s music “can turn a dull evening at home into a heel-clicking night of fun.”
This really is a party right in a CD package.  “Some Kind of Love” opens the set.  The horn section and Vachons’ guitar set the stage, but Pemberton gives it his all on vocals and sells this one big time.  When I heard this opening cover I knew the band had morphed into something really great.  The driving beat and brassy sound really are hot. “She Walks Right In” and many other cuts might be a big band number out of a WWII ballroom; these guys have taken the sound from the old days of 78’s and 45’s and given it a fresh and new facelift.  Pemberton and band do some call and response and we get a great guitar and sax solo to boot.  The band backing them could be Glenn Miller or one of the Dorsey Brothers– this one swing sand jumps!  The title track and tracks like “Ain’t Nothin’ Happenin’” we see Pemberton shouting out his vocals in a great traditional New Orleans style– he and the band really make you want to get up and dance a la the originals sung by Smiley Louis and Little Richard.  “Kill Me” opens with a little wicked guitar and then Pemberton hits you in the face with gritty vocals on this Don Harris and Dewey Terry cut. I can’t mention them all, but they are all great covers of great tunes by a great band!
I’d be remiss not to mention the CD cover.  The bikini-clad Vargas girl look-a-like is very in the period of the pre-and post-WWII sound the band is playing to and modernizing here.  While a tad sexist (ok, more than a tad), it serves as a great depiction of the Dave Bartholomew title track.
If you hearken back to the days when big bands were king or when Roomful of  Blues were white hot with their jumping and swinging sound, then you need to run out and buy this one– I did!
Reviewed by Steve Jones
Posted by Crossroads Blues Society at 1:20 PM