Devil Got His Way reviewed by Steve Jones 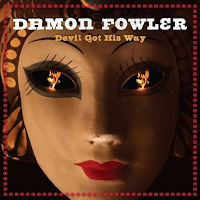 Devil Got His Way
Damon Fowler
Blind Pig Records
www.damonfowler.com
12 tracks
Damon Fowler follows up his first Blind Pig release “Sugar Shack” with another well done album of cool Florida swamp boogie blues rock.  His guitar and slide work continues to impress me.  Joined by Chuck Riley on bass and James McKnight on drums, this trio gives a great effort delivering us a mostly original and creative set of tunes.
The title tracks features Fowler on slide guitar.  His approach to the slide has been compared to some of the greats, and I can see why.  The slide punctuates a great song and lyrics.  His musical skills are maturing nicely– he’s been playing publicly since he was 14 and has spent the past 16 or so years making a name for himself.
“American Dream” is another dark tale with Fowler the story teller and performer excelling at his craft.  His vocals show the despair that he wrote about in his story so very well.
In “28 Degrees” he delivers a fine guitar solo with some nice percussive stuff laid in by McNight.  “Cypress in the Pines” is another great cut, with a throbbing beat and another demonstration of his slide work.
There are a few upbeat tracks mixed in with the somewhat darker majority.  “Fruit Stand Lady, “Don’t Call Me” and “Once in Awhile” are up tempo and occasionally even upbeat lyrically.  We also get to hear a little lap steel on “Fruit Stand Lady”
There are two covers in this set.  “After the Rain” and “Tight Rope” are quite the  contrast in style and approach.  The former is slow and lyrical, with a very contemplative vocal and guitar delivery.  “Tightrope” is the popular Leon Russell song from 1972.  The guitar work is impeccable and the vocals are strong. Russell’s version with piano and his wailing vocals is hard to beat, but  the guitar  solo here is worth the listen.  Fowler gets an good mark for his attempt here even though the song seems a little out of place.
“You Go Your Way” is a bigger production wit Rob Stoney adding his organ to the mix.  Fowler’s guitar solo is super on this one, too.  He ends the CD with “Happy Hour”, a tongue in cheek, drunken party that sounds like it could come from any corner blues or country bar.
Overall I give Damon high marks for this CD.  “Sugar Shack” was a fine national debut and his sophomore attempt continues in that vein.  While not pure blues, this blend of rock, blues, lap steel and swamp pop blend very well.  He’s a solid songwriter and performer with a superb guitar tone and outstanding vocal style.  He will get props for this one, and I recommend it to fans who liked his earlier stuff or who like JJ Grey and that genre of music.
Reviewed by Steve Jones
Posted by Crossroads Blues Society at 1:16 PM