That's The Way You Do It reviewed by Steve Jones 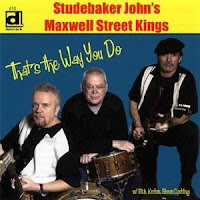 I’ve listened to a lot of Studebaker John Grimaldi’s recordings over the years, and this new release (the first on Delmark) may just blow the rest of them all away! John offers up 15 original cuts, all offering his take on really low down, Westside Chicago Maxwell Street blues. His harp is greasy and hot, his slide cuts like a knife and his vocals are truly inspired. Joined by Rick Kreher on guitar (the last guy to play guitar with Muddy Waters and Rockin’ Johnny’s rhythm player) and drummer Steve Cushing (who is also radio host of “Blues Before Sunrise”), this is gritty, filthy dirty blues the way it is supposed to be played!
Studebaker John’s songs here all hearken back to the West Side of Chicago and the days when blues were played in open air markets by the up and coming along with the greats who played the clubs. John and his band the Hawks began there in the early ‘70’s, honing their skills while listening to and playing with the masters. John writes his own stuff and has filled many acclaimed CDs with his great songs.
The album opens to the title track and introduces the listener to John’s nasal tones and stinging harp. “Side by Side” shuffles along and shows you how John’s guitar can burn it up. “Fine Cadillac” then goes ballistic with a rocking good tempo. Then on the next track John gives us a superb history of Maxwell Street blues with his lyrics and greasy harp on “Headin’ Down To Maxwell Street”. That’s just the first four tracks and there are 11 more that are equally good! “If You Would Love Me”, “Son Of The Seventh Son”, “When Your Mule Won’t Ride”, and “Steppin’ Stone” are but a few of the other great tracks showcasing John and his legendary Maxwell Street Kings band. All of the songs are very tight and well done- no fluff here!
This album is filled with primal blues energy. Each song evokes deep rooted emotions of loves both won and lost, heartaches, fine automobiles, and the time when his blues forefathers blistered the world with their songs and playing. John and his band play it all with equal skill and loving care: slow blues, shuffles and a rocking good style. If you are a fan of his, this one needs to be added to your collection. If Studebaker John is new to your horizons, this is an ideal CD to both introduce you to him and to how the blues should be played! Delmark has delivered another winner with Studebaker John in their stable of great artists.!
Posted by Crossroads Blues Society at 6:36 PM