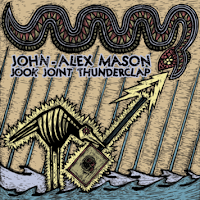 Jook Joint Thunderclap
John Alex Mason
Naked Jaybird Music
www.johnalex-mason.com
10 tracks/42:28
There have been many attempts over the years to take blues music back to its roots, to offer fresh interpretations of the traditional styles. Some musicians, like Chris Thomas King, have tried to extend the musical roots by incorporating modern styles like rap and hip-hop into the music. Rarely have both goals been accomplished as successfully as they are on this new release from John Alex Mason.
Mason has spent time busking on the streets of European cities during a stint in the Army and returned home, ending up in Memphis. There Mason honed his one-man band approach to a razor-sharp edge, utilizing a Lowebow cigar box guitar to create his elemental sound along with a drum kit. His skill with this rig can be heard on five of the tracks. Mason also gets plenty of help from a stellar cast of musicians that includes Cedric and Cody Burnside, Lightnin' Malcolm and recent IBC winner Lionel Young. Also appearing is multi-instrumentalist Gerry Hundt, Mason's former musical partner.
Willie Newbern’s classic “Rolled and Tumbled” gets a laidback treatment with Hundt’s harmonica playing dancing around Mason’s expressive vocal and slashing guitar licks. Backed by Malcolm on guitar, Andy Irvine on bass, Hundt on mandolin and Cedric Burnside on drums, Mason tears into “Signifying Monkey”, vocalizing like a man possessed. The same musicians turn in a spirited rendition of “Write Me a few of Your Lines”, with Young filling in for Irvine on bass. Mason’s harp work is buried in the mix but his exuberant singing is a highlight, as is Hundt’s contributions on mandolin.
On the original material, Mason incorporates the African roots of blues music on several tracks. On “Free”, Fara Tolno punctuates Mason’s one-man band on the djembe, a skin-cover drum played with the hands. Tolno also appears on “Diamond Rain”, a subdued folk blues with Young on fiddle, showing the talent that has garnered him two top finishes in the IBC Challenge competitions.
Tradition merges with modern influences on “Riding On” as Alva Sylla joins Tolno on djembe and Fasinet Bangoura makes an appearance on the balafon, an percussive instrument played with padded sticks that was an early version of the xylophone and marimba. They bring a strong African flavor to the track until Cody Burnside jumps in with a fast-paced rap that fits like a glove. On “Gone So Long”, Burnside delivers another hip-hop vocal that rides the trance-groove perfectly, proving that the seemingly disparate styles can work together. Mason returns to a more traditional style with a tribute to his wife, playing “Whisper” on a 1925 Martin acoustic guitar and channeling all of his feelings into a magnificent vocal performance.
In another nod to modern technology, Mason is offering what he terms as Tracks 0 and 11 as on-line downloads, available as a Tweet, Facebook or through e-mail at Mason’s website (johnalexmason.com). “Delta Bound” is more upbeat than the material on the cd release while “If You’ve Got a Good Friend “ has Mason and band playing in a more traditional electric style. Lighnin’ Malcolm’s guitar work enlivens the former cut while Young’s solo on the latter song has his fiddle sounding like a slide guitar. Hundt blows some hot harp licks on both tracks.
Through it all, Mason pulls all of the elements together through the strength of his vision that embraces the old and the new. His passion is apparent in his heartfelt vocals and his instrumental efforts are the bedrock that lifts this release above the ordinary. If, like me, you are not familiar with Mr. Mason’ work up until now, take the time to check out this marvelous recording. It bodes well for the future of the music.
Reviewed by Mark Thompson
Posted by Crossroads Blues Society at 1:18 PM