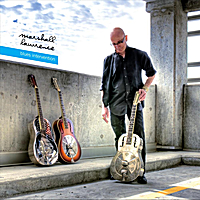 Marshall Lawrence
Self Released 2019
www.doctorblues.com
myspace.com/marshalllawrence
Marshall Lawrence, from Alberta Canada, is a very unusual and different delta blues player. Having a background in leading funk and punk groups, Marshall brings his own edgy roughness to the Delta blues. At the same time he adds his own lyrics that are of a more contemporary style. This style of playing and singing of his lyrics is a very pleasing effect.
“Blues Intervention” is the third acoustic CD released by “The Blues Doctor” Marshall Lawrence. Joining Lawrence’s resonator guitar, vocals, mandolin, banjo and thigh slaps are Sherman “Tank” Ducette on harmonica and Russell Jackson on the stand-up acoustic bass. Jackson has played bass for and toured with BB King, Katie Webster and Charlie Musselwhite to name a few.
This recording, “Blues Intervention”, includes ten original tunes plus three cover songs that Lawrence has his own take on. The opening tune of the recording, “So Long Rosalee”, is a tale of a love gone wrong and over. Lyrics such as, “we had some good times but now the fun is done”, tell us all we need to know, it’s “So Long Rosalee”. This track is an upbeat boogie showcasing the talent of the trio of musicians. Russell Jackson’s bass beat catches your ear as you still pay attention to Marshall’s lyrics and awesome guitar work. You will also become aware of the fact that Sherman “Tank” Ducette is just a fabulous harmonica player. This tune is the right way to start out this blues journey.
“Traveling Blues”, a Tommy Johnson & Mattie Delany tune, features Marshall’s high energy acoustic guitar picking along with his “thigh slaps”. His vocals also stand out on this tune as his voice has a quality of its’ own. This whole tune is well done and keeps your ears perked up to listen to some awesome guitar playing.
“Going Down To Louisiana” is another upbeat, happy, fun tune about “going to have some gumbo, have myself a ball”, at the Mardi Gras. This song features Marshall’s finger picking guitar style, simple fun lyrics and more call and response harp playing from the much talented harp player Sherman Ducette.
All of the tunes on this CD, “Blues Intervention”, do not tell a story of good, fun and happy times. Marshall’s “Lay Down My Sorrow” brings us into the world of drug abuse. This is a drag down, minor keyed song about cocaine and suffering. Great lyrics along with the whining, wailing harmonica licks make this a powerful blues tune. “Lay Down My Sorrow” is a song well done.
Every track that Marshall Lawrence wrote for this project tells us a tale of real life with a Delta blues feel but for current times. With titles such as, “If I Had A Nickel”, “Once Loved A Cowgirl” and “Going To The River”, we know that we are in for some real story telling from Marshall Lawrence. “Blues Intervention” from “Doctor Blues’ is well worth taking a listening to. Everything about this recording is well done and interesting to me. This is what the Delta blues are about. Lawrence’s style brings us a non-traditional look into blues which is more edgy, high energy and upbeat to say the least.  Myspace and Youtube both have really good videos of Marshall Lawrence performing. Check them out.
Harmonica Joe
Posted by Crossroads Blues Society at 12:59 PM