Live From The XM Satellite reviewed by Harmonica Joe 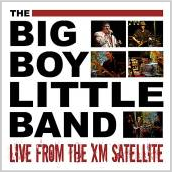 Live From The XM Satellite
The Big Boy Little Band
Big Train Records 2010
http://www.bigboylittleband.com/
9 tracks/39:46
“Live From The XM Satellite” is the debut album from The Big Boy Little Band. This project was recorded at Sirius – XM Studios. Produced by Bill Wax and the Big Boy Little Band it was released by Big Train Records. The CD consists of nine tunes of which six were written by Bret Littlehales, “Big Boy Little”, “Deer Rifle”, by Matt Kelley and a cover, “Down Home Girl”, by Leiber and Butler.
Bret Littlehales, has been around since the 1960’s playing harmonica, singing and writing blues tunes. Matt Kelley is a phenomenal 26 year old guitarist for The Big Boy Little Band. He also won the Albert King award at the 2010 International Blues Challenge in 2010. Rounding out this fine band we have Robby Leebrick pounding out the drums and Wolf Crescenze pumping the bass line for us. This is the makings of a real fine band.
The opening track on “Live From The XM Satellite” is “Shuck and Jive”. Bret Littlehales walks us into this tune with some awesome harp playing. Right away we become aware of the fact that he is a really good harmonica player. Matt Kelly’s guitar solo on this tune is also very outstanding. The lyrics from Littlehales' pen tells us that life is filled with “shuck and jive”. While I am on this tune, I will state that Big Boy Little is one heck of harp player. He is a straight forward, no nonsense, awesome toned blues harp musician! “Shuck and Jive” is a great tune to introduce us to the Band.
“Twelve Bar Blues” is just that, a tune that gets the twelve bar blues running in your mind. Matt Kelley does some outstanding guitar soloing on this song. With “one scotch, one bourbon, one beer”, in the lyrics, need I say more this is the twelve bar blues. The bass line from Wolf Crescenze and the drum line of Robby Leebrick stand out on this tune.
My favorite track on “Live From The XM Satellite” may just be “Carondolet”. This tune opens with another fine harp solo by Big Boy Little. This minor keyed song just has a really eerie feeling about it. There is some voodoo going on with “Carondolet”. This tune is really good stuff.
The Big Boy Little Band has done a really great job with their debut CD “Live FromThe XM Satellite”. This recording is available from the web-site, www.BigBoyLittleBand.com or from CD Baby.