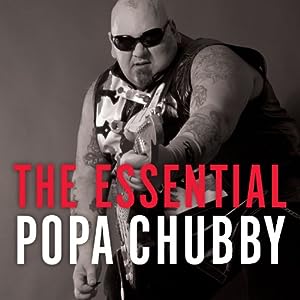 The Essential Popa Chubby
Popa Chubby
Blind Pig Records
www.blindpigrecords.com
16 tracks
If I had to pick one word to describe this CD it would be “tame”.  It’s not bad; actually it’s a pretty good compilation of Popa Chubby’s stuff.  The “tame” label comes from having seen Popa live a few times and comparing the angry, incendiary performances to the tracks they chose for this CD.  It takes until track four with “If The Diesel Don’t Get You Then The Jet fuel Will” to get something with the big, driving guitar sound going, but none of the songs really depict the anger and emotion I’ve seen from this guy.
I’ve always been a sucker for “Daddy Played the Guitar and Mama Was a Disco Queen” from his first CD, and that opens this collection.  It’s a fun song with a good syncopated beat.  His rendition of “Hey Joe” has always been one of the better covers of this song out there.  That and “Hallelujah” from “Big Man, Big Guitar are two of my favorite tracks from this collection.
“Slide Devil Man Slide” gives us a glimpse of this big man’s rawness and power.  An angry slide wails and wails and then Chubby comes in with a spoken word intro, almost rapping, but then breaks into the lyrics of the song.  “Deliveries After Dark” also verges on being quite emotional, with a big, rocking guitar solo and driving drum beat.  “The Fight is On” is by far the best depiction of the big sound and emotion that this guy can burn with.
To a song it’s pretty good stuff, but if you want the burning hot version of Popa Chubby you’ll have to look elsewhere.  Ted Horowicz (Popa’s real name) wrote all but three of the songs here, so you get a good idea of his song writing skills (which are quite good).   It’s a decent intro to the big man’s brand of rocking blues, but in aggregate, this is a collection of Chubby’s milder, kinder and gentler self.
Reviewed by Steve Jones
Posted by Crossroads Blues Society at 12:09 PM