You Better Believe It!- Jimmy Cavallo reviewed by Steve Jones 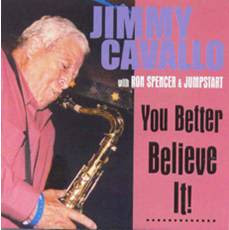 When I was down in Florida in early December, I finally got to visit my brother’s club The Jetsetter Lounge in Lake Worth Florida. I really wanted to hear his regular Friday night gig play. Jimmy Cavallo and his band have been playing my brothers’ club virtually every week since it opened a year ago.

Jimmy’s been around for many years and has a long and great heritage with jump blues, R&B and swing music. He hails from Syracuse, NY, and is of Sicilian descent; he began his career playing while in the Army in WWII. This 79 year old Italian man can still play, sing and swing with the best of them- I was amazed at his youth and vigor. After a great evening of music, I took home all of his CDs that he had with him. I was toying with the idea of reviewing him but when I saw that the latest issue of Blues Review featured his newest CD, I was convinced I had to offer my opinion, too.

After all, I’d met him and listened to him both live and on CD; most of the big time review, while positive, was mainly just promotional material copied from the internet after a quick listen to the CD.

Cavallo’s new CD on Blue Wave is a great set of tunes. Ron Spencer on guitar and the band Jumpstart back up Jimmy on this record; they are great musicians in their own right. Jimmy’s sax is right on throughout as are his vocals. His singing style is his own, and can best be compared to being a blend of the great Italian crooners like Frank Sinatra, Dean Martin, Tony Bennett and Louis Prima. He does not exactly have Sinatra’s edge nor he does not exactly have Martin’s charming hominess. He does not exactly have the same smoothness of Tony Bennett nor the raspy edginess of Louis Prima. What he does have is a great bluesy tone with a level of excitement about music that is portrayed in his voice whether he is covering a tune that has been sung tens of thousands of times by hundreds of artists or covering relatively new or obscure material. He has a huge catalogue of material that he has covered and created, and is pretty much a living legend.

Jimmy is getting ready to celebrate his 80th birthday in a few months, but he looks like a man in his late 50’s or early 60’s and sounds like a man half his age. He opens the CD with a tune bemoaning aging, “I Feel That Old Age Coming On” that is a jumping and jiving song with great vocal, sax, guitar and piano solos. All the songs are fun; the more that Jimmy is rocking the better he seems. Songs with great vocals like “Let ‘Em Roll” and ones that are pure instrumentals like “Broadway” get your blood flowing and make you want to get up and dance. On “Early in the Morning” Jimmy’s vocals go back and forth in the chorus with Spencer’s guitar in a call and response sort of arrangement using guitar to respond to the lead vocals, and then Jimmy blasts into a super sax solo.

I was pretty much sold on Jimmy immediately; it was great seeing him live, and now after listening to this new and several older CD’s I am sure that this guy is one of the best at his craft. The CD is available on line via the Blue Wave link above. If you are ever in Lake Worth, FL, on a Friday evening, in Syracuse when Jimmy’s back at home playing, or if he’s touring near you, you should go catch Cavallo’s act. He still does three sets of great music, a testament to his endurance and dedication to the craft he has spend his life perfecting.
Posted by Crossroads Blues Society at 3:35 PM