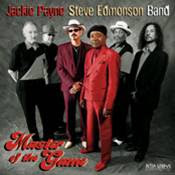 Jackie Payne is a singer with a lengthy resume, including a fifteen year stint as the lead vocalist for the Johnny Otis Revue. He is equally comfortable with blues or deep soul tunes. His partner, guitarist Steve Edmonson, is another veteran with several decades of experience playing up and down the West coast in various bands, including the Dynatones. This is their second release and first for Delta Groove with band members Bill Singletary on bass, Nick Otis on drums and The Sweet Meet Horns - Carl Green on tenor & alto sax plus John Middleton on trumpet. Fred Kaplan and John Thomas sit to provide keyboard support throughout the recording.

Right from the start, it is apparent that this band is ready to lay down a tight groove for Payne to work with. The opening track jump-starts things with a ferocious boogie riff from Edmonson. With the horns riffing behind him, Payne lays out the story of his "Mean Evil Woman" with a voice easily that slides from smooth to a harder edge as needed. Next is the title track, propelled by Thomas on organ and featuring more fine guitar from Edmonson. These cuts and seven other songs on the disc were written collectively by the band.

They slow it down on "A Fool Named Me" and Payne demonstrates that he is a first-rate soul singer, easily hitting notes in the upper register or letting loose with a deep moan in order to convey the hurt in the lyrics. Then the band comes storming back with the houserockin' "Woman in Kansas City", with the Sweet Meet Horns driving the arrangement home.

Three of the last five tracks are cover versions of well-known soul tunes. Tackling a song that was a hit for the legendary O.V. Wright and Otis Clay might be a daunting task for many vocalists, but Payne is up to the task. He barks out the lyrics over the surging arrangement, his voice taking on a gritty edge in keeping with the tale of a downtrodden man left with to "A Nickel and a Nail". The band shines on the Steve Cropper/Eddie Floyd penned "Just the One", an uptempo love song. Another highlight is "Warm Rain Fallin", which sounds like an old soul classic but is one of the group's original compositions. Payne's vocal soars with emotion as it rides the easy flowing rhythm. Green lays down an equally fine sax solo.

The final track provides the perfect showcase for Payne's vocal artistry. "I'll Take Care of You" was a hit for Bobby "Blue" Bland but Payne stakes his own claim with this smoldering version. Payne displays his extensive vocal range as he begs and pleads for his woman to return home. The track unfolds slowly, the vocal building in intensity as Payne injects all the emotion he can into each and every word. It is a masterful performance.

Payne, Edmonson and their band have crafted a disc that ranks near the top in my list of best releases of last year. It is an outstanding mix of Blues and Soul tunes with first-class arrangements and performances. The band lays down a musical foundation that gives Payne's voice all the support it needs. As good as the group is, Jackie Payne sets them apart. He is a master singer and showman as this recording proves on every track. Don't miss this one !!!!!
Posted by Crossroads Blues Society at 6:06 PM