State of Grace- The Holmes Brothers reviewed by Mark Thompson 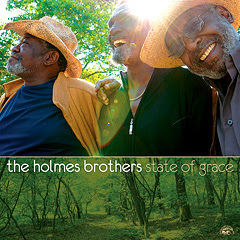 The new release from the Holmes Brothers opens uncharacteristically with a pair of original tunes. Wendell Holmes starts things off with soulful vocal on his "Smiling Face Hiding a Weeping Heart", which also has a sample of his tasty guitar playing. Older brother Sherman then takes over the vocal spotlight on an acoustic version of his original, "Close the Door". Wendell and drummer Popsy Dixon add dead-on harmony vocals. The trio gets excellent help throughout the disc from Glenn Patscha on a variety of keyboards, Byron Issacs on bass and Larry Campbell on an assortment of string instruments.Later in the disc, Wendell lays down a heavy guitar riff on his original "Standing in the Need of Love". Sherman and Popsy are in the backgound, echoing his bluesy lead vocal before Wendell shows us just how good a guitar player he is.

Even with the added help, the focus is always on the superb vocal interplay of the three members. Another strength of their work has been their uncanny ability to interpret songs, especially ones that are most familiar. But the Holmes Brothers will strip a song down to its bare essence, turn it inside out and then reconfigure it in a fashion that often comes close to creating not just a new version but almost a brand new song, so startling is the transformation. The third track provides one example of their ability as Nick Lowe's "(What's So Funny 'Bout) Peace, Love and Understanding?" gets the tempo slowed down, the arrangement punctuated by Campbell on the pedal steel guitar to create a haunting sound behind Wendell's heartfelt vocal for a better world.

The group has always proudly displayed their love of country music, so it's no surprise that Rosanne Cash joins Wendell for a duet on the Hank William's standard, "I Can't Help it if I'm Still in Love With You". Campbell lays down some fine mandolin licks to help creat an authentic feel. Then the Holmes Brothers throw us another curveball by covering Lyle Lovett's offbeat "If I Had a Boat" in a stripped-down arrangement that serves to bring focus to Sherman's lead vocal. Joan Osborne makes a rousing guest appearance to help the group on a rave-up take on "Those Memories of You". Patscha adds some funky New Orleans-style piano in support of the vocal fireworks.

On the last two tracks, the trio shares another of their musical roots. They are joined by Levon Helm for a deep country gospel rendition of "I've Just Seen the Rock of Ages". The ex-Band member contributes a lead vocal with just the right edge of despair tempered by faith. The closing track, "God Will", is another tune from the pen of Lovett. Popsy Dixon delivers the message that an unfaithful woman can hope for forgiveness from God but not from the singer.

This disc is an accurate reflection of what you would hear from a live set by the Holmes Brothers. Their eclectic mixture of blues, country, soul, rock and gospel is a primer on American roots music set apart by their stellar vocal abilities as well as their knack for making something new out of familiar tunes. It is a strong collection from start to finish that ranks with their best work - and comes highly recommended !!!!
Posted by Crossroads Blues Society at 6:00 PM