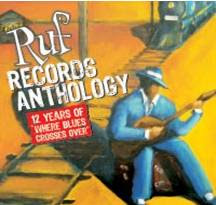 Ruf Records has spent a dozen years taking the blues to new levels of excellence. To celebrate this, they have compiled a sample of 24 previously released songs plus two extra unreleased tracks, evenly split on a CD and DVD. Why 12 years? Thomas Ruf feels the number 12 is important and explains in the liner notes: “I was born on 12/12/65, 12 months make a year, 12 signs complete the various aspects of the ‘Wheel of Life’. The number 12 has magic for me.” So while Alligator, Blind Pig and Stoney Plan have their 5 and 10 year anniversary sets, Ruf blasts out a dozen years of musical retrospective, and what a retrospective it is.

The CD and DVD each work their way backwards chronologically to 1994. I put the CD on first and was blasted out of my seat with Walter Trout and Jeff Healey in “Working Overtime” from Trout’s new “Full Circle” CD. I love the CD (reviewed by Mark Thompson in our September-October Newletter) and this is the most exciting track off of it. The dual guitars and vocals just complement each other and set the stage for a great CD’s worth of music.

Canadian guitar diva Sue Foley follows up with the outstanding title track off of her 2006 album, “New Used Car,” mixing blues and rock with a great ‘Go-Go’s go sensual’ styled vocal track and a driving guitar beat. It is hard to believe she has been performing for twenty years, and she will be a bigger and bigger presence on the blues scene as time goes on.

The good thing about compilations like this are that we get to hear the best of what a label has to offer. I love their artists like Candye Kane and Omar and the Howlers. This is all great stuff. From Larry Garner doing an R&B blues groove on “Where the Blues Turn Black” to more traditional electric blues from Luther Allison and Canned Heat, the CD contains a more than great set of tunes. And then there is the DVD.

Let me start with a statement that there are just a few of the Ruf artists in the past (whom I have not had the pleasure to see live) whose CD’s have left me a bit dry. Aynsley Lister, Ana Popovic and Bernard Allison are three of them. The live DVD gives me a better appreciation for them and all in all the compilation is almost as good as the hugely superb CD. The tracks here are fairly new since DVD technology is a bit newer than CD. We get to see Omar growl out “Monkey Land” from the Howlers “Bamboozled” DVD and Robin Trower return to his blues roots on “Living Out of Time.” I also enjoyed the Imperial Crowns “Lil’ Death” and Bob Brozman wailing on a gritty National steel guitar. Anything by Walter Trout is always great and we get to see and hear him on “Work No More.” A 1994 gem is a music video styled unreleased piece by Luther Allison; “Bad Love” is a cool little video clip by this great bluesman.

For a mere $15 on the Ruf web site you can get 26 tracks of music on CD and DVD. If you don’t have a lot of Ruf CD’s and DVD’s in your collection, this is an outstanding way to get a sampling of their fine catalogue of work. I recommend this compilation to all blues fans who enjoy modern, rocking blues!
Posted by Crossroads Blues Society at 6:08 PM