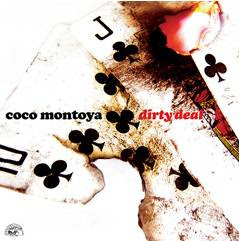 The release on Alligator finds Coco Montoya getting plenty of help from members of Little Feat. Paul Barrere helped produce the disc while adding rhythm or slide guitar, backing vocals and even percussion on seven tracks. The Feat rhythm section of bass guitarist Kenny Gradney and drummer Richie Hayward appear on four cuts while Bill Payne on keyboards and Fred Tackett on guitar each contributes to one track.

The disc opens with the title track, "Last Dirty Deal", with Montoya rockin' hard on this tale of betrayal. Coco belts out the lyrics with a deep, powerful voice while snapping off stinging phrases on his guitar. This medium tempo rocker, co-written by Montoya, makes a fine opening statement. The next track, "Three Sides to Every Story", is a funky workout on a downbeat song that would be right at home on a Little Feat recording.

Things slow down on "How Do You Sleep at Night" but Montoya keeps the intensity turned up, shouting out his lead vocal. Subtlety is a trait often lacking in Montoya's singing. His guitar work does display some restraint but he clearly enjoys every opportunity to go all out. When he dials down the intensity, he can still produce a compelling performance, as he does on a cover Johnny Copelend's slow blues "It's My Own Tears", one of the highlights of the disc. Coco lays down a vocal that conveys the tortured nature of lyrics while ripping notes from the guitar strings that emphasize the pain at the heart of the song. Both songs benefit from outstanding keyboard work from Tony Stead. Barrerre uses him to flesh out the arrangements and to provide a solid foundation for Montoya's guitar solos.

On "Clean Slate", things shift from the blues/rock format to a soulful tune that serves as a nice change of pace with it's refreshingly restrained performance. It is followed by the final three tracks that find Montoya cranking up the guitar and shouting out his vocals over driving beats. These cuts rock hard, showing no mercy and taking no prisoners. It is Montoya doing what he does best but sometimes it gets to be a bit much. A little bit more restraint could have made this package even stronger.

Nevertheless, this ranks as one of the best of Montoya's recordings from start to finish. Barrerre's production creates a engaging musical backdrop for Montoya to work off of. The supporting musicians are outstanding, especially Stead, who adeptly fills each track with his fine keyboard work. Montoya brings it all together with his driving vocals and high energy guitar playing. Definitely a disc worth checking out - especially for fans of Blues/Rock guitar.
Posted by Crossroads Blues Society at 3:52 PM