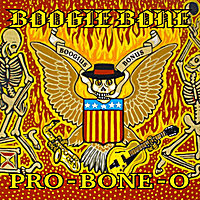 Pro – Bone – O
Boogie Bone Band
Bone Daddy Records
www.boogiebone
band.com
12 tracks/46:26
“Pro-Bone-O” is the third CD to be produced and released by the Boogie Bone Band. This group is really a unique blues band based in Portland, Oregon. Boogie Bone was formed in 2006. Three of the band members, Steven Dee Williams, guitarist and lyricist, Howlin’ Jake Johnston, vocalist, along with Steve Snyder on sax, harmonica, flute and keyboard are the base for Boogie Bone. Todd “Spuds” Stevens joins the band as a fine drummer and after trying out two other bass players Henry Gavaldon was chosen to be the bass player.
I will say from the start that if you want your blues fix to be traditional, straight forward blues, “Pro-Bone-O” may not be for you. If you are open minded and enjoy a band that takes the blues into a special place you are in for a treat with the Boogie Bone Band. This band is hard hitting and driven by a rock influence while retaining the meaning of a blues band. This band brings a whole bunch to the table. All twelve songs were written by Steven Dee Williams and Jason R. Pope.
“Pro-Bone-O” gives us a look at the versatility of Boogie Band’s talent. Their songs take us on a venture of boogie woogie, rock blues, traditional acoustic blues and even some James Brown type funk music. As they perform all these type of music we quickly become aware of the massive amount of talent that this band has to write and play great music.
The opening tune, “Deep Black Water”, gets us in the blues mood with Steve William’s guitar and Steve Snyder’s harp playing off each other with a train type rhythm. This sets up the stage for Jake Johnston’s very interesting vocal style.  “Deep black water don’t pull me down” and “if I live this day I will turn my life around” is just part of the tale told by this tune. What a way to start a CD but this is just the start. Todd Stevens on the drums and Henry Gavaldon on bass do a fine job on this track.
“Got It Made” takes us on the road to some real rock blues. Steve Snyder’s solo harp work really stands out here. This is good for me. From here we are given a taste of some acoustic traditional blues with the tune “The Preacher”. The harp player and guitarist do a lot of playing off of each other on this one. Add to all this some hand claps and foot stomps and we are really enjoying the blues of Boogie Bone.
There is much more to the Boogie Bone Band than I can list here, the rest is all good. ”Pro-Bone-O”, as I said, may be a step from where some consider being the blues. So what! Take a chance, broaden your mind and enjoy the Boogie Bone Band’s “Pro-Bone-O”. It is all good listening.
Reviewed by Harmonica Joe
Posted by Crossroads Blues Society at 1:14 PM