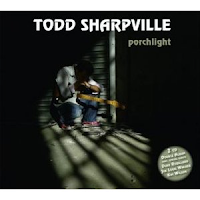 Porchlight
Todd Sharpville
String Commander – MIG Music
www.toddsharpville.com
Disc 1 – 7 tracks/37:54
Disc 2 – 8 tracks/45:29
If you are looking for a musician with a unique story to tell, Todd Sharpville more than fits the bill. He is London-born, descended from royalty and has even been offered a chance to run for a seat in the British parliament. He won several British blues music awards, including one in 1995 for “Best British Guitarist” over fellow nominee Eric Clapton. Additionally he has been an advocate of the Fathers Rights Movement following a lengthy battle with his ex-wife over visitation rights for their two children. And just as Sharpville started to work on this project, his father,  the 3rd Viscount St. Davids, passed away unexpectedly.
Dedicated to the memory of his father,
Porchlight is a two disc set that gives listeners an in-depth look at Sharpville's many talents. Besides his skill on guitar, he is accomplished vocalist and a deft songwriter, composing all but one of the fifteen tracks. And you have to be good to get musicians like Joe Louis Walker, Kim Wilson and Duke Robillard to be part of your project. The band consists of Bruce Bears on keyboards, Jessie Williams on bass and Mark Teixeiria on drums. Besides playing on one cut, Robillard filled the role of producer.
The opening tune, “If Love is a Crime”, finds Sharpville in the clutches of a captivating woman and begging for his release, framed by Wilson's rich harp tones. “Lousy Husband (But a Real Good Dad)” takes a honest look at Sharpville's domestic situation as he trades biting guitar licks with Robillard. The stripped-down sound on “Used” serves to enhance the painful emotions captured in the lyrics. “Why Does It Rain” is a highlight with a soaring performance from Sharpville backed by a horn section of Doug James on baritone sax, Mike Tucker on tenor, Scott Aruda on trumpet and Carl Querfurth on trombone. Wilson returns on “Can't Stand the Crook”, a frenetic rocker that takes to task those who lead us into war under false pretenses, featuring some blazing hot guitar from the leader.
“Old Feeling” is a smoky ballad with a rich vocal from Sharpville. Highlights on Disc 2 include the hard rocking “When the World's Not Enough”, a tale of a man lead into a life of crime by love, with Wilson blowing more great harp. Walker and Sharpville take turns squeezing notes out of their guitars as the pace slows on “When the Blues Come Calling”. Wilson delivers a stunning solo on “Misery”, a two minute masterpiece worth the price of admission. The cut is further enhanced by Sharpville's downhearted vocal and a solo that nearly matches Wilson's.
Many listeners will not be amused by the mentions of violence toward women on Shel Silverstein's “If That Ain't Love What Is”. And the dark “Legacy of Greed” rehashes topics covered more effectively on other songs. But the fat sound of Doug James' baritone kicks off “Whole Lotta Lady”, a cut that would get the dancers on their feet. Sharpville wrote “Busted in Pieces” while he during a month-long hospital stay for depression following the break-up of his marriage. Tucker's wailin' tenor sax provides a spark. The title song is Sharpville's musical meditation on the passing of his father, with his emotions laid bare until he and the band take off on a spirited romp to finish things off in style.
These performances represent a man's struggles to deal with his personal demons – which is what the blues is all about. Sharpville is still standing, having created this musical testimonial to his indomitable spirit and exceptional talent. Available on-line at the price of a single disc, this one is definitely recommended.
Posted by Crossroads Blues Society at 1:11 PM