The Life and Times of Snuffy Wilson reviewed by Steve Jones 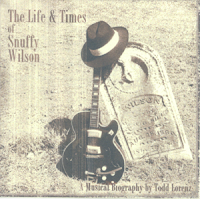 The Life and Times of Snuffy Wilson
Todd Lorenz
Self Released
www.toddlorenz.com
24 tracks (12 songs with 12 narrative introductions)
Todd Lorenz has created the character of aging bluesman Snuffy Wilson who could be any aged bluesman looking back and reflecting on his life and the choices he made, dwelling especially on all that he has lost in his life.
Lorenz embarks on a lot of big projects.  His “write a song a week” project from a few years ago was a huge commitment that resulted in 52 tracks laid down over four CDs.  In this one he has created a man that is a little bit him and a little bit any blues man.
He sings with a lot of pain and suffering, confidence and doubt, loves won and lost, and generally depicting what happens as the years wear us away and break us down.  It is a very creative effort.
Lorenz plays some expressive acoustic guitar throughout.  Whether it be a soft lamenting ballad like “When Liza Cries” or a bolder and driving “I’m The King”. Lorenz shows us he is in control of his instrument.  Never overstated, he picks and fingers his way expressively throughout  the entire CD.
The vocals are a bit behind his guitar work developmentally . I’m not sure if it’s trying to be overly expressive or what that causes the problems I’m hearing.  It sounds like Todd is trying to be someone else at times instead of just being himself.  He’s not off key, it just sounds like he’s over emoting.
The CD overall is quite interesting and Lorenz displays he is becoming quite the folk blues songwriter.  His fretwork is really well done.  “Need to Be Free” and “Redemption?” are great examples of his guitar work.
This is a very interesting body of music that Todd has put together here.  An ambitious musical autobiography of a man’s toils and struggles– I was intrigued and impressed throughout.
Reviewed by Steve Jones
Posted by Crossroads Blues Society at 12:43 PM