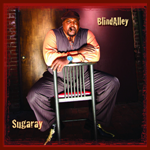 Blind Alley
Sugaray
Self-released
www.sugarayblues.com
10 tracks/40:37
One of the highlights of being a CD reviewer occurs when you start to listen to a recording by a musician that you have never heard of – and they proceed to blow you away with their talent and performances.
And that is exactly what happened with this exciting debut from Caron “Sugaray” Rayford, a mesmerizing singer born in Texas and now living in the Los Angeles area. Sugaray garnered attention as the front man for Aunt Kizzy’s Boyz. The group received second-place honors at the 2006 International Blues Challenge.
His solo recording features twenty-two of the best musicians in the LA area, many of whom Sugaray got to know through hosting a Monday night jam at a Sherman Oaks club with guitarist Chuck Kavooras as the musical director.  And right from the start, Sugaray serves notice that his talent can’t be denied.  Listen to him dig into the opening track, Al Kooper’s “Nuthin’ I Wouldn’t Do (For a Woman Like You)”, his brawny voice shouting out his feelings for the woman of his dreams.  Even better is his gritty vocal on the Son House classic, “Death Letter” with Kavooras supplying Ry Cooder-esque riffs on the slide guitar.
Sugaray channels the Little Milton sound on “You Can’t Win for Losing” with a full horn section punctuating the message of keeping your chin up in spite of life’s trials and tribulations.  Sugaray wrote the title track with bass man Ralph Carter, It’s another highlight with the leader’s expressive singing dominating the tale of a man caught in the charms of a late-night voo-doo woman.  Just as good is his other original, “I Sing The Blues”, as Sugaray recounts his life story over a smoldering arrangement with Kavooras adding another taut guitar solo. The light swing rhythm on “Overnight Sensation” contrasts with the urgency of Sugaray’s vocal, which is softened by Geoff Nudell’s  work on the clarinet.
Two cuts are quite brief, with the gospel hymn “I’ve Got to Move” lasting only 46 seconds – and leaves you wishing you could hear the complete performance.  Sugaray dedicates “Dark Was the Night, Cold Was the Ground” to the memory of his late mother. He adds moans and hollers over the eerie slide guitar work from Kavooris. On the ballad “I let Love Slip Thru My Fingers”, the leader’s performance is lacking the extra spark fond on the rest of the disc.
There is no denying that Sugaray has a huge voice and the skill to bend it to his will.  With stellar musical accompaniment and a stylistically varied set list, he delivers a performance worthy of award consideration.  More importantly,  this project is good enough that each of reading this should waste no time in heading to Sugaray’s website to check this one out – it’s that good !!!
Reviewed by Mark Thompson
Posted by Crossroads Blues Society at 12:48 PM

Thanks for the great review of Suga's CD Mark.