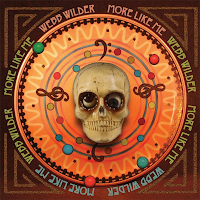 Webb Wilder came to Blind Pig Records
And released his first CD with them early last year (reviewed in our May-June 2008 Newsletter). It was a solid album, and while not truly a “blues” album, it hearkens to the roots of rock and roll music.

The same is true for this effort. The artwork on the album cover sets the tone, mixing the serious with the tongue and cheek.. This album is Wilder’s joyride through the blues via rockabilly, surf music, country, a little punkiness and other musical styles. To say Webb Wilder is witty and irreverent would be like saying that a big, juicy hamburger is a comfort food. It’s obviously true, and yet he is also able to perform seriously with equal skill.

This studio CD opens to the driving beat of “Ju Ju Man”, with some wicked guitar licks. Wilder’s guitar is pretty hot throughout this effort. He intersperses his hot licks with a more restrained approach in the slower tunes where his guitar work is equally sharp. Old standards like “She Said Yeah” get a great treatment; I don’t think I’ve seen this covered with as much applomb since the Stones sang the “Dum deedle dee dum dum” in the mid 60’s. And in “Don’t Slander Me” we get Webb doing outer space based surf guitar. His guitar stings here as it does in “Honk Tonkin’ (In Mississippi). This CD is another great showcase for how this man can handle his Gibson.

Wilder may never take himself seriously yet this guy appears to be a serious artist. Billboard describes Webb and his band as “part Georgia Satellites, part Dave Edmunds, part Elvis Costello and altogether wonderful.” I can’t argue with that assessment. He’s a solid guitar player and vocalist, and has a strong band backing him including three other guitar players. The sound is big and complex.

The slower stuff bears some mention, too. In the original cut called “Too Cool for Love”, we have a song about a chick who acts too cool to let her guard down. It is one of several new songs by Wilder that feature some interesting lyrics. “You’re a piece of work,
I’m sorry if that is too judgmental.
I don’t wanna be a jerk,
Even if it’s experimental.” These are not humorous thoughts, but some serious stuff. Wilder’s a pretty good songwriter who can play it simple and fun or really express himself.

A solid effort from a guy who has been making music since the mid seventies. Don’t expect traditional blues when you hit the play but, but do expect to be entertained by a guy who understand the roots of rock and roll.
Posted by Crossroads Blues Society at 8:05 AM