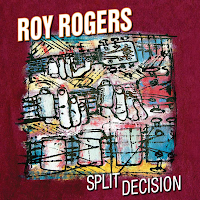 Roy Rogers latest effort showcases this slide master’s guitar in a variety of styles across the CD’s dozen cuts. His reunion with label Blind Pig also happens to be his first studio recording with his band, The Delta Rhythm Kings. He experiments in style with the songs he has penned for this new album and I have to say he succeeded quite well in his efforts.

Rogers aptly described his effort CD in the accompanying promotional material. He noted: "My influences are from all over the map. I love combining different elements on a recording, but ultimately it is about 'the feel' of a total record. I hope that shines through in a positive way for people." That is certainly evident and he slides his way from jazz to a grungy sounding combination of blues and rock and to country, with several stops in between. Several of the tracks stay true to a bluesy rock/rockabilly style that Rogers is quite adept at, but it really gets interesting when he branches out into the other worlds.

The opening track “The Calm Before the Storm” is a song about a cheating woman who is living through the calm before a confrontational storm, but this tune is anything but calm. Rogers blasts his way into this CD with a grunged-out driving beat and fuzzed out and distorted guitar work. When I first heard it I knew that this CD would be a little different.

He then shuffles into the next track, a catchy little honky-tonk track called “Patron Saint of Pain”. Here he sings of a woman walking into a disastrous relationship with a guy he calls the Patron Saint of Pain. Some barrelhouse piano riffs by Phillip Aaberg and Roy’s electric slide convinced me this was going to be a fun ride.

“Rite of Passage” is a great instrumental jazz track with George Brooks’ tenor sax featured. In the middle of it all the song swings over to a greasy slide guitar solo from Roy. A stark contrast to most of the songs on the album, it may be my favorite cut. The other instrumental is a short and almost Spanish acoustic guitar-styled number with Roger’s soloing and sliding his way through. Very interesting and quite good!

If you are a Roy Rogers fan, you’ll love his newest set of songs. It gives one a great sense for the talents of this experienced musician. His slide guitar work is so much more than solid and his vocals are more than up to the task. This CD is fresh and full of great music in a variety of sounds, styles and tempos. The Rhythm Kings (Steve Ehrmann on bass and Billy Lewis on drums) and the other accompanying guest musicians blend together well. Roy Rogers and Blind Pig have put together a great effort here!
Posted by Crossroads Blues Society at 8:10 AM