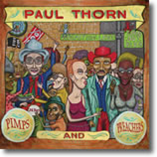 Pimps and Preachers
Paul Thorn
Perpetual Obscurity Records
www.paulthorn.com
13 tracks
I got this album and loaded it up and it began with a good Jackson Brown-like sound and quickly became a pure country rock album.  I would not quantify any of the cuts as blues although the country and rock ties to the blues are apparent in this CD.
Thorn’s vocals wail and bemoan life, drink and work and all the issues we are faced with in typical country lyric fashion.  The big Gibson  guitar sound resonates through his songs. Song like “Tequila is Good for the Heart” verge on blues but are clearly cut from the country mold.  The honky tonk sounds of “Weeds in My Roses” and “I Don’t Like Half the Folks I Love” are much akin to the pop sound of Hank Williams Junior and his work.
Not blues at all but a fun country album for those looking for something off the mainstream and fun.
Reviewed by Steve Jones
Posted by Crossroads Blues Society at 10:04 PM