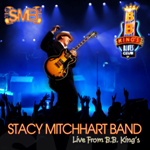 Live from B.B. King’s
Stacy Mitchhart Band
DR. Sam Records
www.stacymitchhart.com
13 tracks
Stacy Mitchhart is a journeyman singer and guitar player who appears all over the place.  He has apparently grown somewhat of a following from his frequent live, radio and TV appearances.  This CD features Mitchhart and his ample band live at the King of the Blues club in Nashville.  The band has Cory Distefano on trumpet and flugelhorn, Paul Brown on keyboard and B3, Jules Caldarera on saxes and flute, Darin James on drums and programming and Emanuel Cole on bass. They provide a deep and intense backdrop to the music, ranging from down home and bluesy to a deep funk.
Mitchhart starts out doing justice to a few blues standards (“Call My Job”, “King Bee” and “Angel of Mercy”) before embarking on seven of the eight next original songs.  The covers are funked up and have a lot of horn sound, which makes them a bit interesting.  The one cover in the midst of the original songs is a somewhat over down but very interesting instrumental of “The World is a Ghetto”; the final song on the CD is a 10:47 cover of Hall and Oates ‘70’s hit “Sara Smile”  which the crowd seemed to love but I found to be missing the mark and overly long.
The original songs are one that I found ranging from at least interesting to verging on very, very good.  The sound is mostly ‘70’s funk with a little blues thrown in.  “Travellin’ Blues” offers up some nice slide by Mitchhart; it an instrumental but the players are restrained and meld together well.  “I Drink Whiskey” is honky tonk blues and has a great groove to it.  On the other end of the spectrum we get tracks like “I Ain’t Gonna Get Down On Myself” and “Grown Ass Man” where we get an overdone visit to funky town that sound like take offs on some of the pop soul tunes from FM radio in the late 70’s.  I think they try to be too much and it doesn’t sell as well as when they are more restrained.
If you are a Mitchhart fan who has enjoyed his live performances you’ll love this CD.  As this was my introduction to this artist, I saw some things I really liked but there were some issues, too.  Like I said, when they play with restraint and work together without long and over done solos they are far easier to listen to than when they go one for over six to ten minutes on a track.
Reviewed by Steve Jones
Posted by Crossroads Blues Society at 10:06 PM