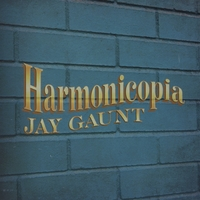 Harmonicopia
Jay Gaunt
JBG Music (self released)
www.jaygaun.com
12 tracks/49:03
“Harmonicopia” is Jay Gaunts second album that he has released. “Blown Away” was released in 2008. This is very amazing to me as he is only about sixteen years old. There are some that will say that Jay is a great harmonica player for someone that is only sixteen.  I would have to say that he is a very accomplished musician of any age. That would be one of my first thoughts after listening to “Harmonicopia”.
This CD is a  good mix of different genres of music including jazz, funk, soul and also  five or six great blues tunes. Also thrown into the mix is Jay’s awesome rendition of “Greensleeves”. Seven of the tunes on “Harmonicopia” are all out instrumental tunes showcasing Jay’s harmonica versatility and mastery of his instrument of choice. This is a job that he has done well.
Jay’s band for this project is a very capable group of performers. Singing all the lead vocals is Victor Wainwright.  The Royal Horns, the Memphis Horns are added to the mix along with three fine guitarist. These are Skip Pitts, Dave Cousar and Josh Roberts.  Also Steve Potts is on drums and bring on the base line is Dave Smith. A fine job on the keyboard is presented by Lester Snell. Here we have a full band showing off Jay Gaunt’s harmonica playing.
As I listened to the first track of the CD, “Listen Here”, I picture in my head Pat Ramsey playing harmonica. After doing some research I find that I am not far off the track. One of Jay’s teacher’s was the amazing harp player Jason Ricci. Jason Ricci’s mentor was Pat Ramsey. Now it all fit together. The list of Jay’s influence reads like the list of great harp players. It includes Jason Ricci, Dennis Gruenling, David Barrettt, Adam Gussow, Mark Hummel and Mike Peloquin to name a few. This is a very impressive list. Jay seems to have paid attention. Jay has also shared the stage with many blues greats. This list includes, the James Cotton Band, Tab Benoit, Rich Del Grosso, Zac Harmon and Jason Ricci & New Blood to name a few. This list is very impressive for any harmonica player yet alone for one as young as Jay Gaunt!
“Devil Dealt The Blues” is a great blues tune with Victor Wainwright’s raspy, throaty vocals standing out as his instrument. Jay’s harmonica playing has that Dennis Gruenling, Little Walter influence standing out here. This is one of the most awesome blues tracks, for me, on the “Harmonicopia”.
For us true blues harmonica fans, “Double Shuffle” gives us a double dose of great harmonica licks and tradeoffs. Jay adds harmonica player Brandon Bailey to the mix on this tune. This combination treats us to some really good blues harmonica playing. Having Dave Smith on bass and Steve Potts on drums laying down the groove the two harp players go at it almost like a harp battle. “Double Shuffle” is harmonica blues as it should be!
Jay Gaunt’s “Harmonicopia” takes us on a trip in several music genres quickly showing us that he is a very talented musician for any age player and will only get better as he goes on. He does a fine job keeping the blues genre alive and well as he does it. With tunes such as “Louisiana Blues”, “Devil Dealt The Blues” and “Home Of The Blues” this is one good CD. Jay’s harp style does not run us over with garbage licks and fast repetitive runs, he plays the blues. This CD is not just for harmonica fans but also for all blues lovers. Jay Gaunt has done a heck of a job with “Harmonicopia”.
Reviewed by Harmonica Joe
Posted by Crossroads Blues Society at 9:47 PM