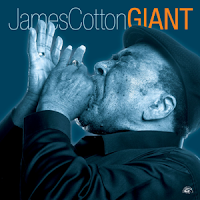 Giant
James Cotton
Alligator Records www.jamescottonsuper
harp.com
www.alligatorrecords.com
12 Tracks/48:37
James Cotton has returned to Alligator Records with his new release “Giant”. Previously  he released two recordings in the 1980’s. These were, “High Compression”, and “Live From Chicago – Mr. Superharp Himself!”  Also he was on the awesome recording of “Harp Attack” with Junior Wells, Carey Bell and Billy Branch. This is one of my favorite blues harmonica recordings.
Over James Cotton’s 65 years of blues harp playing he has released over 30 albums and traveled the World performing the blues. This is way too much info to discuss in a blues CD review. For more about James Cotton, check out www.jamescottonsuperharp.com.
Cotton created his own harp style which includes a sharp attack of a song, high compression playing and great tone. When you hear him play you will recognize his playing just as you do with Junior Wells or Charlie Musselwhite. He just has a really distinct style and sound. His mentors would be proud of him as well. This list includes Sonnyboy Williamson, Junior Wells, Muddy Waters to name a few.
“Giant” features 4 tunes penned by James Cotton plus songs of BB King, Muddy Waters, and Ivory Joe Hunter. Every song on this CD is powerful and able to stand by itself as a true blues hit. This is really good selection for this project.
James Cotton no longer sings on this CD but has the very capable Slam Allen as his vocalist. Slam has a great blues voice with a good knowledge of how blues should be sung. He also does a lot of the fine guitar work on “Giant”. Making up the rest of the band is Tom Holland on guitar, Kenny Neal Jr. on drums and Noel Neal on bass. This is a very impressive blues band to add to James Cotton’s powerful blues style. The band allows Cotton’s playing to be showcased well.
When you have a list of songs such as “Buried Alive In The Blues”, “That’s All Right”, and “How Blue Can You Get”, it is very tough to pick out a song that really stands out. This CD is just packed with great tunes and talent. James Cotton’s harmonica mastery is showcased well!
Cotton’s tune “With The Quickness”, is a really powerful instrumental that shows his enormous harmonica talent . We get a real treat when he ventures to the high end of the harp on this tune. This is some rapid fire blues played well. Slam’s guitar and Cotton’s harp are like at war.
Slam Allen’s version of Ivory Joe Hunter’s, Since I Met You, Baby”, is my favorite tune on “Giant”. Cotton makes the harp line tell us the story as Slam sings it for us. The guitar work also is excellent here.
I can’t leave without mentioning the chromatic harp instrumental, “Blues For Koko”, dedicated to his long time friend Koko Taylor. This is just a great track to listen to over and over. “Mr. Superharp” is really “Mr. Superharp” here. “Giant” is the right name for this CD. James Cotton is a “Giant” among blues harp players. I am sure that he can still suck or blow the reeds out of harmonicas.
Reviewed by Harmonica Joe
Posted by Crossroads Blues Society at 10:12 PM