Back in the Fire reviewed by Mark Thompson 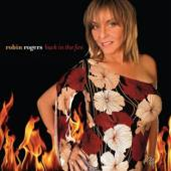 Back in the Fire
Robin Rogers
Blind Pig Records
www.robinrogers.com
11 tracks/47:30
It was a shock when the word came out that singer Robin Rogers was battling Hepatitus C. I remembered her fine performance last year at the Mississippi Valley Blues Fest. And I also reflected back to her excitement at winning the 2009 award for “Best Female Blues Singer” at the BluesBlast Music awards show. Then came an even more dire report – that Rogers had inoperable liver cancer and had been placed in hospice care. The news broke just as Blind Pig was gearing up for the release of Robin's latest recording.
Listening to this disc, you will find it hard to believe that anyone who sounds so robust and frisky could be so ill. Rogers flat out captures the essence of each song, running the gamut of emotions from deep yearning to unbridled passion. The opening salvo on “Baby Bye-Bye” makes it clear that Rogers isn't holding anything back and her life experiences have brought an unflinching realism to her vocal flights.  Check out the opening segment of her cover of Little Willie John's “Need Your Love So Bad”. With Mark Stallings on piano, Rogers' voice sounds a little tattered around the edges. Once the rest of the band joins the proceedings, she digs in and belts out her uncompromising plea. Bob Margolin handles the guitar.
“The Plan” finds Rogers acknowledging all of the good in her life and finding satisfaction with where she's at. It is hard to listen to the track without feeling a level of sadness at the how unfair life can be.She delivers another sensitive vocal on “Ocean of Tears”, alternating mournful cries with a powerful delivery. Robin plays some harp on “Don't Walk Away Run”, as she advises a friend to break away from the ravages of domestic violence. “Hittin' on Nothin'” finds a tough groove with Rogers expressing the end of her patience with a lover's string of unfulfilled promises. “Second Time Around” is a roadhouse rocker, the kind of material that Delbert McClinton used to build his career.
Husband Tony Rogers lays down a multitude stellar guitar parts throughout the disc, including a nasty slide guitar on “Yesterday's Blues”, which also has more fine harp playing from Robin. Other band members include Kerry Brooks on bass, Jim Brock on drums and a horn section of Jon Thornton on trumpet and Tim Gordon on saxophones. Robin and Tony share songwriting credit for seven songs.
This project is successful on all levels. What really separates it from the pack is the strong material that Rogers brings to life with her glorious voice. There isn't a hint of false emotion to be found any where, only a realistic assessment of life and love from Robin's hard-fought struggles. Back in the Fire is a fitting testimonial to Robin Rogers, blues singer extraordinaire !!!
Please consider supporting Robin and Tony by purchasing this recording through Robin's website – address listed at the top – or by making a donation directly to Robin at : Robin Rogers,  1134 Hardin Road, Dallas NC 28034
Reviewed by Mark Thompson
Posted by Crossroads Blues Society at 10:01 PM