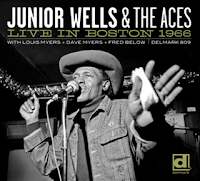 Live In Boston 1966
Junior Wells & the Aces
Delmark Records
www.delmark.com
19 tracks/65:42
Delmark Records certainly has a knack for discovering unreleased live recordings of some of the best musicians on their label. First were several live sets from guitarist Magic Sam that really helped to fill in gaps in his legacy. Then, five years ago, they dazzled us with a dynamite recording of Otis Rush live on-stage at the Wise Fools Pub in Chicago. But their latest release may be the best of all, in terms of historical value and quality of performance.
The Aces - Louie Myers on guitar, brother Dave Myers on bass and Fred Below on drums - were considered the premier blues band in Chicago during the 1950-decade. Their elite status came from their lengthy stint backing Little Walter as he rose to fame as the baddest harp player in the city. But prior to that, the Aces had backed Junior Wells at the start of his career - and together they brought a decidedly urban feel to the scene, injecting a vibrant, swinging beat that elevated their version of the blues beyond the basic rhythmic patterns of the Delta style.
In 1965, Wells had made an impact with the release of his now-classic recording Hoodoo Man Blues, also on Delmark with a backing band that included his long-time musical partner, Buddy Guy, on guitar. But when Wells hit the road the following year, he took the Aces with him. And we are fortunate that someone was able to capture this reunion on tape at an undisclosed Boston club. Opening with “Feelin’ Good”, listeners get over an hour of
Wells in his prime, displaying his potent talents as a singer and harp player. This recording also has numerous segments of between-song chatter that illustrates Wells ability to entertain an audience.
On ‘Worried Life Blues”, Wells delivers a mournful vocal as Louis Myers frames the singer with sympathetic guitar licks. The band turns in a similar treatment on Jimmy Roger’s “That’s All Right” with a tasteful solo from Myers. After a humorous intro from Wells, the group romps through a brief take of “Look On Yonder’s Wall” with Wells taking a fiery solo on his harp.
Three cuts demonstrate Junior’s ability to fashion new material on a moments notice.  “Junior’s Whoop” borrows heavily from “Mellow Down Easy” with Wells and Myers both getting plenty of room for solos. The performances of “If You Gonna Leave Me” and “I Don’t Know” are compelling with Wells singing without missing a beat even though both songs were totally improvised.  The instrumental “Hideaway” is a vehicle for extended solos from Myers and Wells, with Below getting a brief opportunity to display his skill as a drummer.  The opening sequence to “Got My Mojo Workin’” finds Louis Myers wrenching a magnificent solo from his instrument and Wells sing with a conviction that was easy to come by at a time when this song had not yet reached the status of “Freebird” for blues music.
As a historical document, there is no question that this recording is important. There are few recordings available that give us such a realistic look at a legendary blues musician plying his trade in the club environment. The first-rate performances and the snippets of Wells interacting with the audience elevate this release to essential status.
Reviewed by Mark Thompson
Posted by Crossroads Blues Society at 10:15 PM