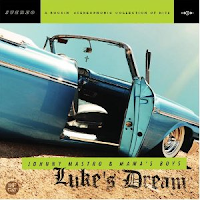 Johnny Mastro & Mama's Boys, a southern California blues band was formed in 1993 in the Los Angeles blues club Babe's & Ricky’s Inn, named after the club’s owner “Mama” Laura Mae Gross. She was Johnny's mentor with advice offered in her three lessons: finding your own sound, keen listening, and the importance of soul in music being the most influential.

Revisiting the last ten years finds the band consistently playing 250 gigs each year in Southern California. In addition to touring with Johnny Mastro & Mama's Boys, Johnny has been a co-host of Big Blend's 'Rants, Raves & Rock'n Roll' radio show.
They were selected to play at the Moulin Blues 25th Anniversary Festival in 2010. They have toured all through countries like Germany, France, Holland, Denmark, Belgium, and 2 weeks in the UK, playing the National BBC, the Burnley National Blues Festival, and the 100 Club. Europe is finding out what Southern California has known for years, that this is simply one of the best contemporary blues bands performing today!

With Mastro's unique vocals and his Sonny Boy Williamson/Paul Butterfield fired harmonica sound, prepare yourself for this compelling blues sound, borrowing from the past and at the same time producing a heart-stopping, rough brand of contemporary blues.  Johnny Mastro & Mama's Boys represent the essence of a hard-driven roots sounding band, creating blues music similar to the late Lester Butler and the California based blues group The Red Devils. That raw and dirty sound blended with the West Coast blues can be heard in a lot of their music. With the explosive slide guitar, guitar, and acoustic guitar of Smokehouse Brown, the vocals and harmonica of Johnny Mastro, the bass and acoustic bass of Michael Hightower, combined with drums from Jimmy Goodall, makes their latest release Luke's Dream one of the premier contemporary albums in the US and Europe.

Luke's Dream opens with the Delta stomp "Luke's Stomp" that will captivate your soul. It's an infectious acoustic number with a haunting groove that you absolutely can't stop playing! "Thunder Roll" opens and continues with an unusual distorted groove, blended with sizzling slide guitar solos and Mastro's vocals and high-energy harmonica. "Knee High" is a explosive rocker featuring Kirk Fletcher and Smokehouse Brown both on guitar. Johnny's vocals are reminiscent of the late great Lester Butler with harmonica solos paralleled to those of Paul Butterfield on this tune. "Junker's Blues," a Jack Dupree tune with a gritty sound and Bo Diddley's "Roller Coaster," showcasing Mastro's superb harmonica work, are the only tunes that aren't original tunes. "Mr. JJ's" Man" is foot tapper with Mastro sounding more like Sonny Boy Williamson on harp. Peter Atanasoff and Smokehouse Brown both tear into the fretboard on the song "Hurt." "Tonight We Ride" and "My Rocket" have more of 60's blues sound, blended with that dirty, raw slide guitar sound that was typical of the legendary Elmore James. The original tune "The Light," sounds like a chapter taken right from the Los Angeles-based Red Devils. "Francine," with the high-energy distorted slide guitar and heavy, hard drivin' drum beat, would top any blues/rock chart. "Spider" is an acoustic tune sounding like it could have been resurrected right out of the Mississippi Delta. The CD concludes with the distorted guitar-driven song "Temperature," typical of the 60's psychedelic blues artists like Jimi Hendrix.
The Long Beach, California blues group Johnny Mastro and Mama’s Boys will take you on a journey through time, as they have evolved into the masterful, innovative contemporary blues band that you will hear when you listen to Luke's Dream. One listen and you will captivated by this exciting blues group!

Posted by Crossroads Blues Society at 7:37 AM