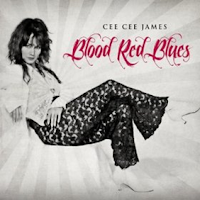 Christina (Cee Cee) James started her first band at the age of 12, after moving from Portland Oregon to California. She continued to work with rock, blues cover, and original bands until she formed her first original blues band, Stone Blue in San Diego. She improved her songwriting skills in the late 1990s and began recording song demo's in San Diego and Los Angeles.

She released her first CD, Spiritually Wet, in 1999 taking home the Los Angeles "Independent Artist of the Year Award." By 2004, she decided to move back to Portland, Oregon due to some traumatic life changes. She followed up in 2008 with her second CD title, Low Down Where The Snakes Crawl, co-written with Rob "Slideboy" Andrews, Cee Cee's husband and Slide/Rhythm guitar player, with 11 original cuts depicting her life of heartache. It was released by FWG Records and re-released by Blue Skunk Music in February 2010, gaining considerable air time and finally reaching #8 on the National Roots Music Report, #7 on XM 74 B.B. Kings Bluesville, and #15 on the Living Blues Report. She received the Klamath Falls, Oregon International Blues Challenge and was sent to Memphis, Tennessee to compete in the January 2010 IBC finals. In May of 2010, FWG Records released Cee Cee’s live CD Seriously Raw, recorded at the Sunbanks Blues Festival in eastern Washington. After being picked up again by Blue Skunk Music and re-released for world wide distribution in October, 2010, the CD rose to #1 on Cashbox, and dropped in the top 20 on the XM 74 B.B. Kings Bluesville chart, staying there for 10 weeks. It was also successful enough to earn Cee Cee the well deserved title of "Best Blues Songwriter" and "Best Blues Vocalist" for the Washington Blues Society in 2010.

Dubbed the "vocal volcano" by Robert Horn from the Washington Blues Society, James has combined the early funk and soul heard on her first CD, her later powerful, gritty vocals, and her superb songwriting to create her latest CD Blood Red Blues.

The CD, released July 17, 2012 on FWB Records, produced by the legendary Jim Gaines, contains twelve original blues tunes again co-written with Rob Slideboy' Andrews. Her vocals, compared at one time to the legendary Janis Joplin, have that same style combined with the seductive vocal style of Alannah Myles on this new release. The title track "Blood Red Blues" combines the slow deliberate slide guitar of Andrews, piercing leads by Rocky Athas, soulful vocals from James, and deep gospel background vocals into a masterful opening number. It is followed by "Let's All Get Loose" a heart pounding, hard drivin' tune, driven by the scorching leads of Athas and gripping vocals that will capture your soul. Cee Cee delivers passion and soul along with the smooth slide guitar work of Andrews on the tune "Feel My Love Come Down."  Cee Cee will put you into a trance with her sultry, soulful voice heard on "Comfort of a Good Heart." Her gritty, Joplin style vocals return on "I Got A Right To Sing The Blues" with the slide guitar of  Rob Slideboy' Andrews brought to center stage. In this tune, James shares the pain of her life experiences only to expand on those painful times and what they offer in the quiet tranquil song "Wounds." In "Worn Out Sins," Cee Cee asks the Lord for help to free her mind by healing the 'worn out sins' that have burdened her, sung in her gritty, Joplin style voice. "Walk On" is a powerful, raw tune about coming to grips with the problems plaguing society today, featuring superb guitar solos of Rocky Athas. The up-tempo tune "Cover Me With Love" and the slow blues number "100 Ways To Make Love" deliver a message about the passion and power of love. Cee Cee completes this new CD with the rocker "I'm Takin' Mine" as she tells us she has paid her dues and it's now time to give those hard earned ‘diamonds’ in her soul.

Her powerful vocals will chill you to the bone on Blood Red Blues, another masterpiece produced by Jim Gaines. It will captivate you from beginning to end, as you listen to this incredible new CD on FWG Records.

Posted by Crossroads Blues Society at 7:50 AM