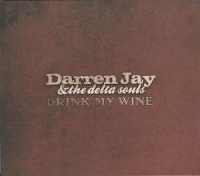 This new release marks several significant points in Darren Jay's career. It features his new band of Memphis-based musicians including several high-profile guests. And it appears just as Jay left for a tour of duty in the middle East as a member of the US Naval Reserve. He certainly deserves our thanks for his service to our country – and we can show our appreciation by making a point to check this out.

It won't take long for you get caught up in the strong performances on this one. Jay is an engaging singer and a guitarist with chops to spare. He burns through the opening instrumental, “Rider”, spurred on by the swirling Hammond B-3 organ chords from Tony Thomas while “Zilla” has a big beat supplied by Rodd Bland, son of legendary singer Bobby “Blue” Bland, on drums. Jay's musical partner, Laura Cupit, lays down a thick bass line while Jay supports himself, adding rhythm guitar behind his measured lead work.

Two tracks feature a three piece horn section consisting of Art Edmaiston on sax and Marc Franklin is joined by Wayne Jackson of the legendary Memphis Horn on trumpet. They get a chance to stretch out at the end of “Workday Blues”, a lively number that bears a strong resemblance to “Everybody Needs Somebody to Love” with some searing guitar licks from the leader. “Too Late Baby” is rousing Texas-style shuffle with the horn blasting away behind more greasy organ from Thomas and Cupit on backing vocals.

“(Baby) Don't You Lose My Number” is a fun little blast of rock & roll with Thomas impressing with his keyboard prowess while Jay's guitar work elevates “Everybody Get Together”, which suffers from generic lyrics. Drummer Hubert Crawford sets the pace on the title track, his muscular pulse the perfect backing for Jay's blistering guitar. Another one of Jay's impressive originals, “River's Edge”, closes the disc in dark fashion as the singer heads to Memphis to search for his woman. Once again, Jay sparkles on lead and rhythm guitar.

The band's version of “Hoochie Cootchie Man” veers away from a blues feel in favor of a heavy rock performance that scores points for at least opting for a a different approach to this well-worn classic. Jay shows off his skills on the other cover, “Tin Pan Alley”, his soul-wrenching playing offering a fine counterpoint to his understated vocal. Edmaiston to form a one-man horn section on tenor and baritone sax.

Darren Jay & the Delta Souls can take a lot of pride in this release. They offer up a varied program that features earnest original tunes performed with the expertise you would expect from a band of veteran Memphis musicians. And this one will have you looking forward to the date when Jay will have completed his military service and is able to showcase his talents on stage. I certainly want the opportunity to catch his live show. Until then, this solid effort will remind me of what we are missing.

Posted by Crossroads Blues Society at 7:57 AM