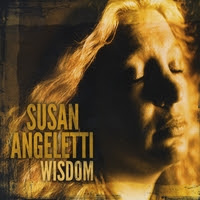 Wisdom
Susan Angeletti
Self-Released
www.susanangeletti.net
7 tracks
It seems more and more that the albums we get to review are a stretch from what we’d call traditional blues and in some cases not even blues at all.  This album falls in that latter category.  It’s really a rock album, but it’s one helluva rock album.  Angeletti’s vocal wail and scream in a stylistic manner similar to the stratospheric offerings of Heart’s Ann Wilson.  Bruce J. Korona’s guitar is wickedly rocking in the manner of many of the 80’s rockers but adds his own original twists.  They are both talented individuals and their sound is very big and very tight.
“Eye to Eye” verges on blues but really is more aptly classified a rock ballad.  The title cut is rock that has a bluesy tinge, but again it’s very cool rocker. “Got To Have You Baby” has some call and response, but in a rocking setting.  “Rock Me Right” (another nice song written by Tom Hambridge) opens with a blistering rocking beat and atmospheric vocals which continue into “Hypnotized”.  “Knock On My Door” goes more in a Journey/Heart does rockabilly direction, but it’s cool with a bit of a blues rocking boogie beat.  “Myrtle Beach” is a mid tempo rocker that Angeletti also handles well. Angeletti wrote or co-wrote the rest with Korona and delivered a nice set of rocking tunes.
There are a lot of contributors on this CD adding to the big, rocking sound.  Ted Wert’s keyboards added some nice depth and sound to the album and the two “Polish Pauls” (Dawicki and Dabrowski) are super in their rocking back line support.  Produced by Jim Fogarty (who also appears on piano, acoustic guitar and backing vocals), the CD has a nice balance and mix.  The only complaint is that it is just 7 songs covering a meager half hour.  It is a wild half hour ride as Angeletti delivers her blistering vocals with an equally burning guitar and supporting cast.  Hot, rocking stuff for fans of that genre!
Reviewed by Steve Jones
Posted by Crossroads Blues Society at 6:22 PM