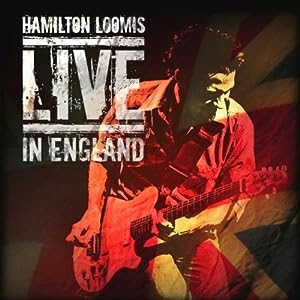 Live In England
Hamilton Loomis
Ham-Bone Records
www.hamiltonloomis.com
14 tracks/72:48
“Live In England” was recorded at Famous Monday Blues in Oxford, England and Liverpool Marina in Liverpool. This whole recording is the real deal without overdubs allowed anywhere. Maybe this is how all music should be recorded.
If you are not familiar with Hamilton Loomis, this recording will give you insight to who he is and what he is all about. Loomis is a multi-instrument player, including guitar, bass, keyboards and harmonica. Besides all of this he is a charismatic, intense, animated blues singer as well as a fine song writer. This man is just one plateful of blues.
Hamilton had a great mentor in BoDiddley. At the age of 16 he was given the chance to show his stuff to BoDiddley. He must have done this well as this relationship turned into a longtime friendship as well as having a musical mentor. This shaped the direction that his music was going to follow. Other influences for him include BB King, Joe “Guitar” Hughs, Clarence “Gatemouth” Brown, Albert Collins and Johnny “Clyde’ Copeland. You can go to www.hamiltonloomis.com for more information.
Joining Hamilton on stage is the very talented Stratton Doyle playing his powerful style of saxophone, keyboards and adding vocals. Bringing on the bass line is Kent Beatly, who also adds some great bass solos to the mix. The steady-ready drummer on the recording is Jamie Little who also adds vocals. Along with HL this band is one tight, talented music machine.
After a short introduction, “Live In England” opens with a really outstanding instrumental piece. “Pull Strings” is almost five minutes featuring the musical talents of these powerful band members. This selection is bluesy, funky, jazzy and just plain good to listen to. Stratton Doyle, on sax, walks us into the music world of the Hamilton Loomis Band with his outstanding solo. Doyle is one of my favorite sax players to see perform on stage. This sax solo sets the stage for Hamilton to show us where his guitar skills are coming from. The mix of these two playing back and forth is very entertaining. While on this track, the drum beat from Jamie Little is very present as well as Kent Beatly’s bass line is holding everything together. This tune is a great way to start out a blues CD.
“Bo Diddley” opens with the all familiar Bo Diddley beat. Hamilton plays his Diddley style guitar on this tune and lets us know that he paid attention to his mentor and friend. His vocals are well phrased with the music and have that real a blues quality to them. Stratten Doyle jumps into the mix adding some of his keyboard talent to the tune. This track is a real hit for me!
“Workin’ Real Hard” is the tale of the guitar man playing his music. He is just “workin’ real hard, doing nothin’ at all” and “playing music all night, having a ball”. This is the blues guitar man’s life. Hamilton gives us a full blown sample of his guitar skill on this tune while pumping the audience to join in with him. This song is another keeper from HL.
“Live From England” is one fine example of Hamilton Loomis’ vast talent and love of the blues. He comes to entertain the fans every time that he is on stage. Putting this all together with the powerful band joining him makes Hamilton Loomis “Live From England” a real listening pleasure to me.
“Ain’t Just Temporary” Hamilton Loomis “Blind Pig Records” -  11 Tracks 49Minutes 18 Seconds
While talking about Hamilton Loomis, I want to take time to mention another of his fine recordings.  “Ain’t Just Temporary” was released by Blind Pig Records in 2007.  Hamilton Loomis showcases his many talents on this one also. Most of the tunes on this CD were written or co-written by Hamilton Loomis. Almost all of the music is performed by HL. This includes guitar, harmonica, bass, keyboards, organ, drums as well as the vocals.  This man is very multi-talented.
“Ain’t Just Temporary” opens with “Best Worst Day” a tale of a relationship that is just not right. The lyrics, “she takes everything that I’ve got, I can’t stand it but I can’t stop”, “she makes me crazy, it hurts my mind but it feels so good that I just keep coming back” still after all this, “it is the best worst day of my life” tells us a real blues story. Loomis gives us insight into his song writing ability here. The song starts with Trevor Root on drums walking us into Hamilton’s guitar lead right into the vocals. Besides HL”s guitar, keyboards, bass and vocals we are presented really saxophone playing from Vince Palumbo.  This is a good tune for me.
“You Got To Wait” features Bo Diddley on guitar and vocals with Loomis. This is quite fitting to have his mentor and friend record this tune with him. This song features some great lyrics about taking your time will make it better. I assume that this relates to playing the music. You can take the lyrics where you want. Hamilton plays some awesome slow blues on this tune. The interaction between the two players here is very interesting. This is what the blues are about.
“Ain’t Just Temporary” is a blues project well done that does the many talents of Hamilton Loomis justice. I really like and will listen to this CD more than a few times
Reviewed by Harmonica Joe Poluyanskis
Posted by Crossroads Blues Society at 1:44 PM