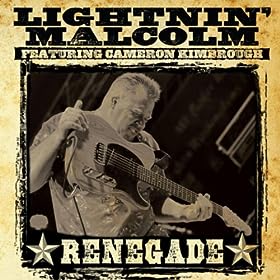 Teamed up with drummer Cedric Burnside as the Two Man Wrecking Crew, guitarist Lightnin' Malcolm established his credentials as true practitioner of Mississippi hill country blues. Now he is the leader – singer, guitarist and songwriter plus playing drums and bass on one track each. His musical cohort, drummer Cameron Kimbrough, is the grandson of Jr. Kimbrough, who along with R.L. Burnside defined the trance style of playing that defines the hill country music.
The guitar-drum combo puts a lot of pressure on the guitar to bolster the rhythm pattern from the drums while simultaneously adding accents to keep the listener's attention. Malcolm succeeds admirably – in fact, he focuses almost exclusively on the rhythm, keeping his solos brief and devoid of any histrionics.

Check out his nasty tone and forceful guitar playing on “So Many Women”, his vocal riding the relentless beat supplied by Kimbrough. The title cut is an instrumental with crashing cymbals punctuating Malcolm's taut guitar lines. “Stop Fighting Over Me” is another example of the blues stripped down to the basics as guitar and drums intertwine to form a forceful rhythm pattern while Malcolm pleads for some peace in his love life. The Jimmy Reed-style groove on “Come Go With Me”
features hand-clapping, tambourine from Rosalind Wilcox and Malcolm handling the drum track.

The dark, primal guitar tone Malcolm employs on “Foxfire Ranch” makes that instrumental track special while his blustery vocal on “My Lyin' Ass” is another highlight. Three cuts feature the Lucero Horns – Jim Spake on baritone sax, David McNight on tenor sax and Nahshon Benford on trumpet. On these tunes, Malcolm shows his fondness for reggae music,the Caribbean version of hill country music. The horns energize “Guilty Man” before supplying a soulful backdrop for Malcolm's vocal duet with Nadirah Shakoor on “My Precious Jewel”. On “North Mississippi”, J Grubbz injects a rap segment rides Malcolm's guitar, briefly showing that these two styles can work together effectively.
Malcolm's thick guitar tone on the ballad “Last Night I Held an Angel” serves as a contrast to his sensitive vocal. “Tell You Girl” is another love song with a lighter touch that almost seems out of place in the midst of the deeper grooves of the other tracks. The duo bring the disc to a close with a fine performance on “You Better Recognize”, a swaggering, stompin' hill country blues.
Despite the inherent limitations of working in the guitar-drum format, Malcolm and Kimbrough consistently make this music sound fresh and vital. If you are longing for a chance to listen to a record that celebrates rhythm and feel over instrumental prowess, this record will cure what ails you. Just remember to play loud and make sure there's room to dance!

Posted by Crossroads Blues Society at 8:36 AM