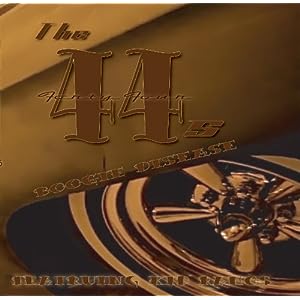 The 44's, based out of Los Angeles first made the blues scene in 2007 at the International Blues Challenge in Memphis, Tennessee. Their solid live performances have gained them recognition locally in the Los Angeles blues community. Los Lobos was so impressed with the band, they approached them to go on tour with them in 2008. They have been receiving rave reviews by blues critics like Robert Kinsler who wrote the following statement in review of their 2009 opening for B.B. King at the Doheny Blues Festival. “Any overview of my day has to include the strong set by the 44’s, an electric blues band that kicked off the action with a set of Chicago blues crossed with primal rock “n”roll.” The group has backed blues artists like Kid Ramos, Johnny Dyer, Elvin Bishop and Rod Piazza just to name a few. The 44's should be the type of blues group touring from coast to coast as opposed to working almost exclusively on the west coast.

Johnny Main does a superb job of incorporating into his guitar style that west coast blues sound of Hollywood Fats as well as delivering equally talented vocals to west coast audiences. Other members of the band include Tex Nakamura (formerly of War) on harp, Mike Turturro on upright bass, (formerly with Lynwood Slim/Candye Kane), and drummer J.R. Lozano. Producing their first album Boogie Disease is Kid Ramos of The Fabulous Thunderbirds, The Mannish Boys, and most recently Los Fabulocos.

Boogie Disease opens with a tune written by the entire group, with Kid Ramos featured as a guest on guitar. With Ramos and Main on guitar and Nakamura on harp, "Pull My Strings" sounds like a page right out of the west coast songbook. Also included on the CD are the two songs penned by Lester Butler of the California blues group The Red Devils "So Low Down" and "Goin' To The Church." Listening to Tex Nakamura on harp is a must for Red Devil fans. The 44's are equally as good as The Lester Butler Tribute Band from Holland on the two Lester Butler cover songs. The 44's are superb on Willie Dixon's "Take It Easy" and Chester Burnett's  (Howlin' Wolf)  "Commit A Crime." The title track "Boogie Disease," penned by the entire band once again, could have easily been done by The Red Devils at the height of their success in the late 80's. Kid Ramos is also featured on this original tune as well as the Willie Love's tune "Automatic" also a big hit for Red Devil fans and the song written by Ramos "Johnny Cochino" included on the cd. The group absolutely blows the roof off with the William Clark tune "Blowin' Like Hell."

Boogie Disease a great collection of traditional west coast blues. Hopefully there is more to come in the future from the 44's. Talent like this is rare. We can only hope the next cd doubles the number of song titles.

Posted by Crossroads Blues Society at 8:19 AM