Put It On Me! reviewed by David Stine 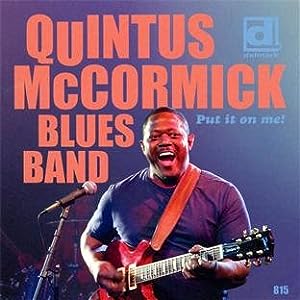 Quintus McCormick is hardly a household name. His life, as with many blue men and women, has taken many a turn to get to the point where even recording a CD is possible. This is McCormick’s second. The various experiences in McCormick’s life are apparent in the variety of music hear from soul, to blues, to horn-driven R&B to gospel. Also apparent is the time McCormick spent in college learning music and arrangement.
McCormick wrote all the songs on the CD, sings them, and plays guitar throughout. He is aided by his band, John Chorney (keys), Vic Jackson (bass), and Jeremiah Thomas (drums). Billy Branch adds harmonica here and there, as well as The Chicago Horns (Kanny Anderson, Hank Ford, Jerry DiMuzio, and Steve Berry).

Thee CD starts off with “You Just Using Me,” a Jimmy Reed-esque toe tapper that brings a smile to those who have been used and know how to turn it around. Song two “Talk Baby,” is SO Average White Band that I looked for this influence in the Delmark propaganda that was included with the CD. Nope. However, this may be my favorite cut on the CD. “How Quick We Forget” (song three), is a nice, slow soul/blues that McCormick, unfortunately, decides to muddy up with unnecessary overdriven guitar solos. McCormick as great chops, but believe me fellas who want to do this: it adds NOTHING to the statement to kick in the OD! It’s not more soulful, hornlike, or “bluesy.” Forget Stevie Ray Vaughan—his brother had the right approach. Moving right along, “Same Old Feeling,” ride refreshingly along on top of an electric piano that sounds like and electric piano! Nice arrangement job on this one! The focus stays on the lyrics, McCormick’s soulful voice, and the lovely arrangement here – another bravo. Song five, “I Got It Babe,” is a ZZ Hill (who McCormick worked with for a while) influenced romper that is another highlight. Bill Branch’s harp opens song six, “The Blues Has Been Good To Me,” that melds blues and jazz chords putting a unique spin on what might have sounded oh-so-standard. Again, though, the guitar solo is ODed almost to the point where it is annoying. “Loveland” is another horn-driven soul with McCormick adding some nice Wes Montgomery style octave playing. “Don’t Know What To Do” with its “Boom Boom Boom” du da du du is funky and honest and bluesy. And because it’s bluesy, yes, THAT guitar sound is back. Branch blows some major harp on this tune and the backing B3, and clever lyrics, saved this from “filler” for me. McCormick’s lyrics kind of take a tumble on the awkward “Changes.” “If you don’t change, nothing’s going to change” reminds me of the last Aerosmith hit with the lazy “I miss you babe and I don't want to miss a thing.” Oh well, there’s not a lot of poetry left in music anymore.  Wait, is that “I’m Ready”? Nope, it’s song 10 and the title track, “Put It On Me.” This not the strongest song on the CD, but maybe that’s not the criteria for CD title choices – I’ve never known. It’s an OK song, but kind of redundant. “Sadie,” which follows is. To me, funkier and heavier, and guess what, McCormick proves he can play just as fast without the OD pedal! Who needs Barry White or Lou Rawls when you hear song twelve, “Say Lover”? Hey folks, it’s right in there. Nice horn arrangements and S-M-O-O-T-H vocals. McCormick nails it! Oh oh, what’s this - a blues song that McCormick plays without that doggone OD pedal?? Nice.
There’s some T Bone Walker here, so maybe that’s why. Just the same it proves to me he can do it without trying to doctor up an already good song. Q decides to close this fairly long CD with a gospel song titled, appropriately “Hallelujah.” Without going into details of McCormick’s personal life, this is indeed and appropriate closing to the CD.

Listeners seem to be both bombarded with and drawn to BIG names with the BIGGEST television or internet presence. Guys like Quintus McCormick will never compete with Buddy Guy or Eric Clapton or John Legend, but this is a CD with A LOT going on. It’s varied, well arranged and performed, and it is very good. If you like some soul mixed in with your blues, I think you will enjoy this CD. Forget what you saw on American Idol, Quintus McCormick is in it to win it, dog!

Posted by Crossroads Blues Society at 8:29 AM