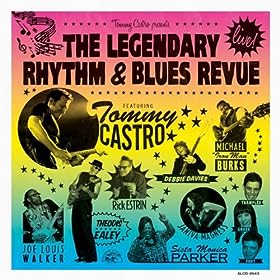 I have a bumper sticker on the back of my rider mower that says “I’d Rather Be At A Tommy Castro Show.” Once you hear this CD, You’ll agree with me – this was the one to be at! Tommy smokes, the band smokes, the guests smoke, and I’m surprised anyone made it out alive! Besides Tommy and his horn-heavy band: Keith Gross man (sax), Tom Poole (trumpet), Tony Stead (keys), Scott Southerland (bass), and Ronnie Smith (drums). Guests include Debbie Davies, Joe Louis Walker, Michael Burks, “Sista” Monica, Janiva Magness, Rick Estrin, Theodis Ealey, and Trampled Under Foot. These songs are NOT from one show, but an assemblage of shows from both fall and spring 2010 and 2011, usually after one of the cruises has ended or before another begins AND when the "guest" roster is available.  Listening to the CD, however, it  sounds like one big continuous party!

From the first song, “Wake Up Call,” to the closer, “Serves me Right To Suffer,” the listener is treated to some of the best folks on the blues scene and friends assembled from Tommy’s years of being on the Legendary Blues Cruise. Tommy takes to first two songs and he is at the top of his game, here: his guitar playing has never been better, nor his voice and showmanship so strong. “Wake Up Call” is still sizzling when Castro kicks off a heart pounding rendition of Dylan’s “Gotta Serve Somebody.” Michael Burks takes over song three to let us catch our breath a bit (intro only!) for his “Voodoo Spell.” When Burks kicks it in, rest time is over and he lays down some mighty slide work and we are under his spell. Next, Joe Louis Walker funks it up with a James Brown tweaked reading of “It’s A Shame.” Once again, the Castro band proves they can do anything. By backing so many artists so well, the band adds to the overall consistency of this CD and makes it a real joy. Following Walker, Sista Monica Parker takes the helm with the help of Castro on some nice understated guitar (for a while) on “Never Say Never.” At this point in the CD, it a nice touch to slow it down and quiet it down (we older folks can’t take too much high energy). Rick Estrin is next up with “My Next Ex,” arranged to fit the horn accompaniment. This is nice change from the album version. Kid Anderson, Little Charlie Baty’s replacement does his quirky playing where needed to keep the song theirs. My favorite family of lefties, Trampled Under Foot brings “Fog” to the cruise masses in a manner only they can do. TUF is definitely a band to watch. No help needed from the Castro band here. Tommy’s back for “Painkiller” with reminiscences of the Stones’ “Heartbreaker” (but I like it). I have been a Tommy Castro fan since I reviewed Can’t Keep A Good Man Down for another paper (back in the day) that rhymes with BAM. Songs like “Painkiller” show how Tommy has grown and perfected his craft and his show. Janiva Magness, Castro, and the band give a new read and new legs to “Think” (Not Aretha, James Brown). How do you pick a highlight on such a great CD? I’m tempted on this one but, I won’t go there. Theodis Ealey will make you run to your Al Greene recordings with his “This Time I Know.” No lie, you’ll swear it was a song you heard Al Green do and you just forgot. Soul supreme, here. Debbie Davies steps up next to “Strategize” with the band on “All I Found.” She’s one of my favorite contemporary Strat players and the only woman (I’m such a sexist). Tommy closes the CD (and, to our ears, the show) with Percy Mayfield’s “Serves me Right To Suffer.” From Mayfield smooth to a Magic Sam “house rockin’ boogie,” Castro takes it out the way he brought it in – making us wish the "show" would never end!

Walk, crawl, steal your brother’s bike, or maybe swim to get this CD. If you’ve ever wondered about the talent on the blues cruise, any of these artists or you just need to pick up your day, get this CD!

Posted by Crossroads Blues Society at 8:32 AM