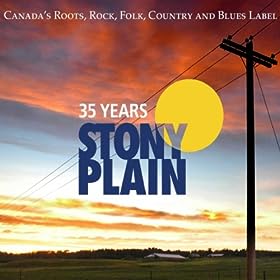 This compilation celebrates the latest milestone for this celebrated record company based out of Edmonton, AB Canada. Stony Plain has managed to survive despite the twists and turns of the music business in recent years while offering a wealth of high quality music in variety of genres. The first two discs in this package give listeners a broad sampling of the treasures contained in the company’s catalog.

The first CD is titled “Singers, songwriters and much, much more…”, featuring examples of folk, western swing, country, swing jazz and roots rock music. Tracks of interest to blues fans include Maria Muldaur’s “The Diplomat” - done in the jug band style that she mastered early in her career – and the intertwined guitars of Jay Geils, Duke Robillard and Gerry Beaudoin on the instrumental jazz cut “Shivers”. Another swinging track features rapid-fire comping from Jeff Healey’s guitar in support of the magnificent violin playing of Drew Jurecka. Asleep at the Wheel highlight the blues element in western swing music on a marvelous rendition of “That’s Your Red Wagon” with lap steel wiz Junior Brown making his first recorded appearance. The last  three tracks are unreleased tunes from Bob Carpenter, an influential Canadian singer/songwriter. Other artists include Steve Earle, Ian Tyson, Emmylou Harris and Rodney Crowell.

The second disc, “Blues, R&B, Swing, Jazz and even more…”, starts with a bang with Duke Robillard and his band getting everybody in the party spirit with title track from his release “Stomp! The Blues Tonight”. Duke is also paired with the legendary Kansas City jazz piano player Jay McShann on a splendid cover of “Moten Swing”. Jeff Healey returns with a live version of “I’m Tore Down” that reminds us that Healey and his guitar could rock with the best.  Another guitarist, Ronnie Earl, displays the intense passion of his work on the instrumental “Miracle”.

Many listeners will be scrambling to check more of Kenny “Blues Boss” Wayne’s superb vocal and piano after hearing his playing on “Heaven Send Me an Angel”. The late Doug Sahm captures the heartbreak of “Teardrops on Your Letter” from a session with guitarist Amos Garrett and Gene Taylor on piano. “Honey Do Woman” features Sonny Rhodes, who plays blues on a lap steel guitar.

Other highlights include Doug James” baritone sax behind Sugar Ray Norcia’s delightful vocal on “Dirty, Dirty People” and Rosco Gordon doing a gritty remake of his big hit, “No More Doggin’”. The last five tracks are more unreleased gems. The first, “Ain’t Broke and Ain’t Hungry”, is from Richard Newell, aka King Biscuit Boy, a gritty singer and superb harp player. The other four cuts present the last four recordings done by influential slide guitar player, Robert Nighthawk, at a late session in 1965 in Toronto.  His marvelous slide work drives “You Missed a Good Man” and his spirited vocal is a highlight on “I’m Gonna Murder My Baby”, our favorite song from our Blues in the Schools programs (ask me about the story!).

The DVD contains a tour of the Stony Plain offices, a video montage of Jeff Healey behind his performance of Neil Young’s “Like a Hurricane” as well as a too-brief clip of Ronnie Earl & the Broadcasters live doing “Betty’s Bop” and Duke Robillard tearing through “Workin’ Hard for My Uncle”. The real treasure is Jay McShann and Johnnie Johnson, the piano player on Chuck Berry’s hit records, doing a piano duet in the studio on “Going to Kansas City”.

This package is the perfect summary of the 35-year legacy of the Stony Plain label. Holger Peterson and Alvin Jahns have released 100’s of titles in a variety of genres. Make sure that you take the time to sample the some of the treasures in their catalog.

Posted by Crossroads Blues Society at 8:42 AM