Look Out reviewed by Mark Thomspon 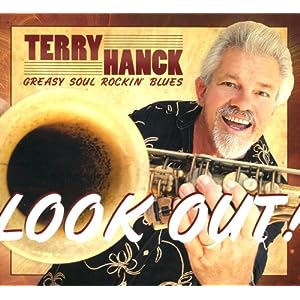 The cover of this disc states “Greasy Soul Rockin' Blues” and for once, there is truth in the advertising.  This is the kind of stuff that the King Record label was built on – the kind of records you used to hear all day long in the 1950's to early 1960's. It's not surprising that Terry Hanck grew up listening to the hot R&B and blues songs of the time. What is surprising is that the the 66 year-old Hanck is playing and singing with energy level of musicians several decades younger. His brawny tenor sax calls out like a voice in the wilderness, one minute soothing your soul and the next beckoning you to the dance floor. Equally impressive is his singing throughout the disc. Hanck manages to change his tone enough on several tracks that you might think someone else is handling the lead vocal. What is consistent is verve and zeal that  Hanck infuses in every performance on the album.


Hanck spent ten years as a member of the Elvin Bishop Band before deciding to head off on his own. At one point, he befriended an aspiring guitarist during a tour stop in Oslo, Norway. Chris “Kid” Andersen later made the trip to California and was a member of Hanck's band for four years. After that, he did a stint with Charlie Musselwhite before accepting his current position with Rick Estrin & the Nightcats. Besides playing guitar on six songs, Andersen engineered the sessions, co-produced the recording with Hanck a and plays keyboards on two cuts. The rest of the band includes Johnny “Cat” Soubrand on guitar, Tim Wager on electric bass, Butch Cousins on drums, Bob Welsh on piano & Hammond B-3 and Lorenzo Farrel on upright or electric bass on three tracks and B3 organ on two others.


Hanck's musical preferences are readily apparent in the songs he selected to cover. “My Girl Josephine” has the easy-rolling tempo of New Orleans R&B, providing plenty of room for strong solos from Soubrand and Hanck. The band takes “Train Kept A Rollin'” back to its jump blues origins as the leader blows one exciting chorus after another over the hand-clapping rhythm. Freddie King's instrumental “Side Tracked” is another delight as Hanck's solo builds to a climax in the upper register of his horn before Soubrand's solo will leave you wondering where this talented guitarist has been hiding out. Hanck's muscular blowing and dynamic singing spark Chuck Willis' “Keep A Driving”. There are more guitar and sax fireworks on “Ain't That Just Like a Woman” before the tempo slows down for  “Catch That Teardrop”, an R&B tearjerker with Andersen's guitar adding some heat. “You Give Me Nothing But the Blues” was popularized by Louisiana bluesman Guitar Slim but Hanck and the band turn it into a show stopping tribute to Jr. Walker and the All Stars. Soubrand's stinging guitar licks set the stage for Hanck, who blows the house down!


The disc features five of Hanck's compositions that match the quality of the rest of the material. “Appreciate What You Got” finds Hanck doing a humorous assessment of the current state of affairs and trying to stay positive. Another gem is “I Keep On Holding On”, with Hanck pouring his heart out to the woman he loves, refusing to give up on his dream. The arrangement of “Here It Comes” is dominated by Welsh on organ. “Girl, Girl, Girl” has a bouncy, reggae-influenced rhythm plus another strong vocal from the leader. Farrel's plucks some fat notes from his upright bass behind Hanck's late-night, smoky sax solo to open “You Coulda Let Me Go”, a slow blues with another fine vocal from Hanck. Soubrand rips it up on the closing number, paying tribute to Ike Turner's guitar style on “Just One More Time”, but not before Hanck makes a statement of his own on the sax.


This one is a party from start to finish. The joy and passion that Hanck brings to this project will win you over. When you add in the outstanding contributions of his band and guest musicians, it is easy to see why I include  Look Out among the handful of exceptional recordings I have heard so far this year.  It may be old school but it sure sounds good !!!

Posted by Crossroads Blues Society at 8:21 AM