That’s What I’m Talkin' About reviewed by Mark Thompson 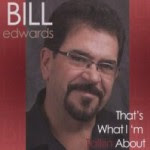 On his debut recording, Bill Edwards gets the opportunity to showcase his fine singing voice as well as his abilities as a songwriter. In the liner notes, Edwards thanks the late James Brown and Tower of Power for their life-changing music. While he doesn’t get as funky as the legendary Brown, Edwards comes up with an exciting mix of blues, r&b and soul.

“Twelve Step Program” is an Edwards’ original that finds him pleading for help to escape a bad love affair. Another stellar tune is “Powered by Patron”, with Edwards describing how a few drinks causes a transformation from wallflower to ladies man. The horn-driven track is stronger because Edwards ignores the humorous aspects of the subject in favor of a straightforward description of the liquor’s benefits. The proceedings take a darker turn on “Oh No No” with Donald Benjamin sharing writing credit with Edwards and providing most of the instrumental backing, including slide guitar. Edwards describes a failing relationship while Corrin Huddleston lies down some fine down-home harmonica licks.

Edwards hits the mark again on “Your Presence is Requested”, his voice soaring over the horns and  Nick Moroch’s taut guitar playing.  On “Love Oughta Come With Instructions”, the leader delivers a strong performance that typifies blue-eyed soul.
His cover of Denise LaSalle’s “Steppin’ Out” takes a harder edge as Edwards declares his freedom from a cheating woman before he trades vocals with Eve Soto on the closing passage.  Soto and Vaneese Thomas provide the backing vocals on “Be Careful What You Wish For” in support of another intensely soulful vocal from Edwards,

A couple of tracks miss the mark.  The lyrics to “Customize My Love” are too simplistic and wordy to make an impact despite another quality vocal effort from Edwards. The cover of “Rocket 88” is taken at a rapid-fire tempo that doesn’t seem to play to Edwards’  strengths as a singer.

Another plus is the strong support of musicians like Moroch on guitar and bass, Mennonna on keyboards and horns and Pete Generous on drums & percussion. They bring life to the musical  arrangements and Edwards has the savvy to know exactly what to do as well as the vocal skills to pull all of the pieces together. If you are looking for more than the standard 12-bar blues progressions, you should give this one a listen.