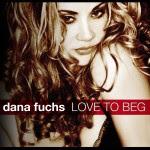 It is rare to get an opportunity to review a recording by a singer who has starred in an off-Broadway production as well as starring in a major motion picture. Dana Fuchs has both accomplishments on her resume, playing Janis Joplin in the Love, Janis musical. She also had a featured role in Across the Universe, a film based on the music of the Beatles, with Fuchs singing four cuts on the soundtrack including a raucous version of ”Helter Skelter” as Joplin might have done it.

Fuchs possesses a husky voice that is a perfect match for the material on this disc. Most of it bears a heavy rock influence with some blues licks occasionally creeping into the mix. There are also some soul elements, particularly on her tribute to her favorite singer, Otis Redding, on “I’ve Been Loving You Too Long”. Glenn Patscha’s Hammond organ work steers the arrangement of “Summersong:” into Al Green territory.

Fuchs unleashes the full power of her voice on “What You See” and really cuts loose at the end.  “Golden Eye” channels Aerosmith as Fuchs’ majestic vocal is surrounded by swirling guitar chords courtesy of Jon Diamond.  Her sassy, vocal channels Joplin over the steady-rolling groove on “Drive” while she belts out the lyrics on ‘Faster Than We Can” over the driving beat from drummer Carter MacLean and Whynot Jansveld on bass.  The title song features Diamond on slide guitar and harmonica as part of a full-blown arrangement with Fuchs belting out the lyrics.

“Nothing’s What I Cry For” is another rocker with Fuchs once again singing with power but showing restraint, avoiding the temptation to pepper her performance with an overdose of needless vocal gymnastics. The closing track, “Superman” employs a familiar blues riff and finally gives listeners a glimpse of what Fuchs can do in a more traditional blues setting. “Keepsake” is a gentle ballad that allows Fuchs to showcase her sensitive side. Even better is her tender, yearning vocal on “Keep on Rollin’ “ with Jenny Douglas and Vivian Sessions helping out on background vocals.

If you appreciate a great singer, take the time to listen to Dana Fuchs. While blues takes a backseat to rock for most of this disc, the consistently strong singing from Fuchs will quickly win you over. While there could have been a few more “shake your soul” moments, this recording provides ample proof of her vocal skills.