Tore Up from the Floor Up reviewed by Steve Jones 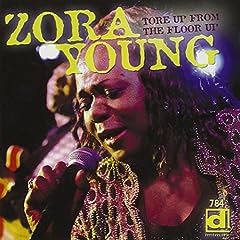 Tore Up from the Floor Up
Zora Young
Delmark Records
www.delmark.com
13 tracks/66:30

Zora Young belts out the blues with the best of them, but what most impressed me with this CD was her restraint. Yes, the vocal pyrotechnics she can launch remain spectacular, but Zora seemed at her best when she takes it down a few notches and growls out a ballad like Muddy Waters’ “Two Trains Running.” She shows restraint, but occasionally unleashes her power in emotional outbursts of energy. I enjoyed the CD and, especially, this track.
Her 5 original songs shined, including the upbeat title track, a slow number about “Toxic” relationships, and a double entendre filled track called, “Handy Man.” Mixed in are some great blues covers and some classics. Don Robey’s “Ace of Spades,” “Rainy Night in Georgia” and the medley of “Since I Fell for You/Sihouettes” allow Zora to show off some of the depth of her repertoire. She began in Gospel, went into R&B and now pretty much can hold her own in any musical genre.
This CD contains a dozen songs and an interview with Zora. Listen to the interview first to set the stage for what’s coming up, then sit down, play the twelve musical tracks and enjoy Zora Young doing what comes best to her- being herself!
Posted by Crossroads Blues Society at 10:21 AM