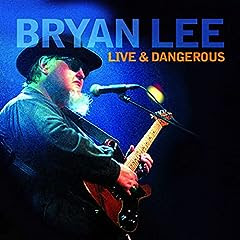 Bryan Lee's CD "Live and Dangerous" was recorded live at the Spectrum in Montreal, Canada in October 2003. The band consists of Bryan Lee on vocals and guitar, Brent Johnson on guitar, Bruce Katz on the Hammond B3 and keyboard, Johnathan "Cujo" Limjuco on bass and, last but not least, Craig Panosh on drums. This is a great lineup.

"The Bounce" is an instrumental tune that sets the stage for the rest of the show. Good bluesy guitar trade-offs between Bryan Lee and Brent Johnson are interspersed with B3 playing by Bruce Katz. The bass line and drum beats bring it all together.

"The Walk" gets going with Bryan's unique vocal style. You hear the New Orleans influence and also what I would call a chirp at the end of some verses.

"Don't Take My Blindness for Weakness," which is written by Bryan, gives us some insight into blindness. Bryan writes about this in several of his tunes. "Don't take my blindness for weakness, because I'm just as good as you." sums it up. This tune has it all- great vocals, lyrics, guitar licks and the B3 hanging in the back. He also gets the crowd into this tune.
"Second Line Home" gives the drummer, Craig Panosh a time to shine. Bruce Katz also shows his abilities on the keyboard on this. Bryan works the fans again.

Moving on to "Blues On My Mind," an upbeat minor key tune, Bryan shows that he indeed has the blues on his mind. His voice is very grabbing with great depth and clarity. Again, he also works the crowd on this tune.
"Hug Me Till It Hurts" is a great choice for this CD. The beat, vocals, lyrics and great guitar solos are depicted in the old blues style.

Bryan does his version of Ike Turner's "Gave You What You Wanted." "Ain't my fault you didn't get what you got" continues the lyrical message in this song.

The last two tunes are written by Bryan Lee. "Six String Therapy" has great lyrics. It features Brent Johnson on the guitar and Bruce Katz on the Hammond B3. "Memphis Bound" gives us more of their guitar work. Listen to the lyrics on this one. "Hey, Hey, The Blues Are All Right" brings the audience back to a grand conclusion.

It is all good on Bryan Lee's CD "Live and Dangerous." Check it out at www.justin-time.com or at Bryan Lee's own personal web site www.braillebluesdaddy.com. Bryan Lee will be at Big Cities Lounge March 14, 2006. Do not miss this show.
Posted by Crossroads Blues Society at 10:03 AM