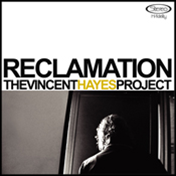 Reclamation
Vincent Hayes Band
North 61 Records
www.vincenthayes.com
11 tracks
I was working at the Blues Blast Music Awards back in October and Vincent Hayes handed me this disc and asked me if I’d review it.  I said sure, embarrassed not to know much about him or his music.  I’d heard a song once over the summer on Sirius/XM and that was about it.  A  20 year music veteran, Hayes is new to the blues mainstream (whatever that is), but he has put together a very tight band and an amazing CD.  I listened to it several times and asked myself repeatedly, “Where has this guy been?”  And after listening to this and writing my review, it was nominated for a Blues Music Award, so I started the review over again!
Hayes is a veteran axe man who has a superb tone.  He gets off on long riffs and yet still has good phrasing and respect for the empty spaces between the notes.  He slings his gun well but with the proper respect for the music.  He wrote all the songs here and produced the album in conjunction with Glenn Brown from the Lansing studio he recorded this at.
He begins with solid vocals and guitar on “Hit Me High, Hit Me Low”, a jumping number that highlights his skills quite well.  The notes flow well off his fingers and the duo backing him are right on as is Steve “Doc” Yankee on piano (his solos are excellent!).  David the Butcher Alves is on bass and Donnie Hugley is on percussion, a super rhythm section.  Christian VanAntwerpen is solid on all the various organs and he first gets highlighted on the next track, “Insecurities”. Two songs of slow blues come in at about 10 minute long but neither seems to drag or labor due to the great guitar and piano solos in “I’ve Got a Right to Change My Mind” and guitar and organ in “Some Kind of Fool”.  While the guitar solos are long, Hayes shows restraint in his playing and sells these long solos well.  The one instrumental on the album, “Sticky Thigh Jive”, bounces back and forth with guitar and B3 in a beautiful groove.  He ends with a flame thrower, “You Can Take Your Troubles. He really can burn it up!
Hayes is a great guitar player and impressed the heck out of me with this CD,  The band and other players with him are equally good and they certainly are worthy of the praise they are getting for this CD– highly recommended!
Reviewed by Steve Jones
Posted by Crossroads Blues Society at 2:45 PM