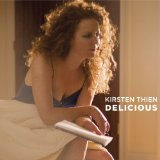 Delicious
Kirsten Thien
Screen Door Records
www.kirstenthien.com
13 tracks
Sultry, seductive, rocking, hollering, testifying, smoking hot- this CD runs the gamut of emotions and showcases the talents of this fine young artist.  Kirsten Thien’s third CD release is a superb album that ranges in influences from Ida Cox through Linda Ronstadt with some Church influence to Aretha Franklin and beyond.  Her R&B laden brand of blues was born on a German Army base, grew up in Maine listening to Linda Ronstadt and singing in a “Northern Baptist” church, and then was exposed the Aretha and New Orleans music  and the 1920’s blues singers in Georgetown at college.  After abandoning a career in banking, she set her sights on music and the Memphis sound.  Her vocals remind me a little of another red headed singer, the great Bonnie Raitt, but she is uniquely her own woman.
Thien gives us 11 songs (2 tracks are remixed for radio and reprised at the end of the CD) of which she wrote or had a hand in writing 8 of them.  Two of the covers are from Ida Cox and Willie Dixon.  Her rendition of Cox’ “Wild Women Don’t Have the Blues” is stripped down with her on acoustic guitar and Memphis musician Billy Gibson in harp.  It is also included as a bonus video when you play the CD on a computer.  It is a powerful rendition that showcases her ample voice and talents.  The Dixon song evokes her sultry side as she snarls and wails about all the symbols of good and bad luck, again with less accompaniment- just guitar and drums are backing her.  The last cover is “Taxi Love”, a down and dirty number that is about what the title states.  Written by Charlie Feldman and Jon Tiven, Thein more than amply describes the backseat love affair of the song and allows the listener to enjoy her ride.
The title track is a breathy song that starts by likening her delicious love with her man to the apple in the Garden of Eden, but then tells us she is not singing about apples. Her vocals exude the flames of lusty lovemaking. “In “Treat ‘Im Like a Man” she tells how she will get her guy just by treating him like a man.  “Love That’s Made To Share” opens the set with Thein backed by the large cast of characters including Hubert Sumlin and a horn section.  It’s a bouncy and fun tune where she talks about the love she has that is made to share.  Sumlin also joins her on the lusty “Please Drive”, a down and dirty number where she describes the lust of a young girl “going for a ride” and asking her guy to, “Please drive”.  Love and love making seem to find their way into a lot of her songs, and she portrays it all quite well!
The tracks are hot, the vocals are even more smokin’ and the backing musicians know when restraint is best and when to let it all out.  This is a marvelous CD by a great singer and song writer.  Whether it be a stripped down track with just one or two people backing her or a song with big horn arrangements, the music evokes rawness and emotions.  Thien’s third CD make me want to run and check out her first two.  A most highly recommended album!
Reviewed by Steve Jones
Posted by Crossroads Blues Society at 3:10 PM