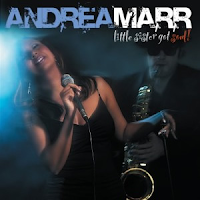 Little Sister Got Soul
Andrea Marr
Amphead Music
www.andreamarr.com
10 tracks/41:23
Hailing from Australia, Andrea Marr wastes no time in displaying her vocal prowess on the opening track of her new recording.  She makes effective use of her husky voice on a storming run-through  of Dinah Washington’s “Soulville”, cutting loose with a piercing scream at the end. Next Marr switches to a sultry persona on “Steam Up the Windows”, featuring a fine sax solo from Sean Vagg.
The bluesy “I Prefer You” slows the pace but not Marr’s intensity as she spells out her feelings for the man of her choice. Greg Dodds contributes a potent guitar line and the horn section does a great job of framing Marr’s vocal. Some singers get over-powered by horns but Marr has plenty of power in her voice and seems to relish the challenge that the brass provides.
Marr had a hand in writing seven of the tracks and every one is a delight. On “Superwoman”, she leaves no doubt that she isn’t an ordinary woman and consequently requires an extraordinary man to keep her satisfied. Cam Scott’s organ injects a funky touch while his exciting horn chart borrows a line from the James Brown playbook. Marr mixes rock with a soul influence on “Taught Me to Love” with Vagg blowin’ another tough sax solo and Scott working hard on the piano keyboard in support of Marr’s sassy performance.
Glenn Kaiser’s “If I Leave This World Tomorrow” starts out with Marr testifying over Scott’s tasty piano work before Dodds’ guitar delivers a heavy lick that shifts the track from gospel territory into a strong blue-rock number with Dean Matters supplying the required big beat on drums and Clint Healey generating the fat bottom on his bass.  Marr proudly struts her stuff while singing the praises of her “Real Good Man”.  The pace doesn’t let up until the final track when Marr closes with a sassy rendition of “Baby Got Me Crazy”.
The horn section of Paul Williamson on sax, Shane Hughes on trumpet and Dave Palmer on trombone provide a spark on every track. Dodds tends to spend most of his solo space squeezing a lot of tortured notes out of his guitar without creating much real emotion.
As for Marr, she provides plenty of evidence that her 2009 Australian Blues award for Best Female Vocalist was well deserved. Once you listen to this recording, you will quickly realize that she has the talent to win more awards once she gets some exposure stateside. This one is an outstanding mix of blues and soul topped off with Andrea Marr’s awesome vocals. Don’t miss this one !!!
Reviewed by Mark Thompson
Posted by Crossroads Blues Society at 3:09 PM